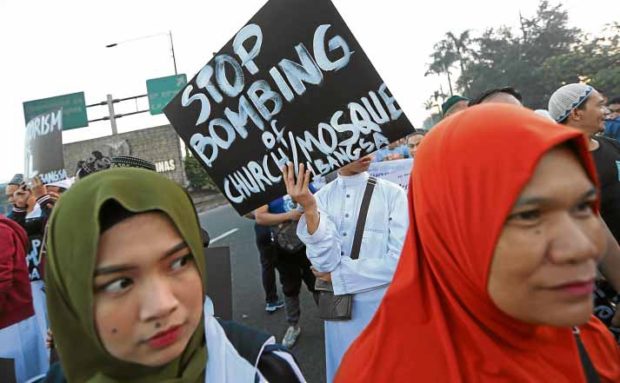 Indonesia is willing to help the Philippines investigate twin blasts that killed 22 people and wounded nearly 100 others in Jolo, Sulu province, a week ago, Interior Secretary Eduardo Año said on Sunday.

Speaking on state-run radio, Año said the Philippine government had sought help from the Indonesian government in identifying the perpetrators of the attack on Our Lady of Mount Carmel Cathedral in the Sulu capital.

He spoke a day after he claimed that the attack was carried out by an Indonesian couple, the latest information in an investigation that had been fraught with inconsistent and sometimes contradictory statements from authorities and, according to one investigator interviewed on television, complicated by a contaminated crime scene.

Col. Noel Detoyato, chief of the public affairs office of the Armed Forces of the Philippines, said on Tuesday that two survivors had spoken about seeing a woman leaving a bag in a pew in the fifth row from the back of the nave then hurriedly getting out of the church.

“That is the method of the deployment [of the bomb] so it’s not a suicide bombing,” Detoyato told reporters on Tuesday, answering questions about the possibility of a suicide attack.

He said nobody could have ascertained the location of the second bomb because commotion broke out after the first explosion.

Defense Secretary Delfin Lorenzana said how the attackers got in or near the church would never be known, as all the soldiers stationed at the main door of the cathedral died in the blast.

Lorenzana, however, spoke about the deployment of the first bomb as Detoyato had told reporters.

But the picture changed later on Tuesday after President Rodrigo Duterte told reporters that the bandit group Abu Sayyaf was behind the blasts and that a couple carried out the attack.

Then Lorenzana said the second bomb, which exploded at the entrance to the church, may have been set off by a suicide bomber, “as indicated by body parts strewn all over.”

Año came in on Friday with information similar to the President’s but with the claim that an Indonesian couple guided by the Abu Sayyaf carried out the attack.

“It was the Abu Sayyaf who guided them, studied the target, did reconnaissance and surveillance work, and brought the couple inside the cathedral,” Año said in a peace meeting in Palo, Leyte province.

In an interview on television, Año said the male bomber was known as Abu Hubda, among several aliases, and had been living in Sulu for a long time.

Año also said there were witnesses who had said the female bomber did not leave the church, suggesting she may have been killed in the explosion.

No foreigner, however, has been identified among the dead in the church.

On Sunday, Año said the Philippine government sought help from the Indonesian government and received assurance of assistance.

“We coordinated with the Indonesian government. They will help. At least we will know if we can identify these bombers behind the cathedral blasts as Indonesian,” Año said.

Indonesian foreign ministry spokesperson Arrmanatha Nasir, however, said the government had not been able to confirm the involvement of Indonesian nationals in the Jolo attack, the Associated Press (AP) reported on Sunday.

On Saturday, Sidney Jones, director of the Jakarta-based Institute for Policy Analysis of Conflict, said that Manila was apparently still in the dark over the identity of the perpetrators.

Fitriani of the Center for Strategic and International Studies who uses only one name concurred with Jones, saying that without evidence it was too early to conclude that Indonesians were involved in the bombings.

The President ordered government forces to destroy the Abu Sayyaf after the Jolo attack.

The military launched an operation in Patikul, Sulu, and troops encountered on Saturday what Lt. Gen. Macairog Alberto, the Army commander, identified on Sunday as an Abu Sayyaf faction led by Hatib Hajan Sawadjaan, who is suspected of helping plot the bombing of the cathedral.

Sawadjaan’s band has reportedly sworn allegiance to the Islamic State jihadi group in Iraq and Syria that is attempting to establish a province in Southeast Asia based in southern Philippines.

Five soldiers and three Abu Sayyaf gunmen were killed in two hours of fierce fighting in the jungle between troops from the 5th Scout Rangers Battalion and Sawadjaan’s group of about 100 fighters, Macairog said.

Besana said there were foreign fighters in Sawadjaan’s group but did not say how many and from what countries.

“We cannot give a definite number as to how many and their nationalities because these are operational details,” Besana told the Inquirer.

The attack on Jolo was followed by a grenade explosion at a mosque in Zamboanga City on Wednesday in which two Muslim preachers were killed and four others were wounded.

The government tightened security in the region following the bombings, with house-to-house searches by the police and the military in Jolo in pursuit of the perpetrators of the blasts at the cathedral.

A 9 p.m. to 4 a.m. curfew has been imposed in Jolo and other parts of Mindanao since 2017 when the President imposed martial law on the entire island to crush a terrorist siege of Marawi City in Lanao del Sur province.

The military has denied a shoot-to-kill order has been issued for curfew violators. —Reports from Julie M. Aurelio, Julie Alipala, Jeannette I. Andrade, Divina M. Suson, The Jakarta Post/Asia News Network, and the wires

Read Next
Rights group cites other ways to deal with child offenders
EDITORS' PICK
Legislators among those linked to corruption, says DOJ chief
WHO: Keep guard up even with COVID-19 vaccine nearing rollout
Manufacturing heavyweights weigh in on post-pandemic transportation, logistics, and supply chain in Cisco Live Series
Speed of COVID-19 vaccine development an extraordinary feat
Smart celebrates the Season of Giving with GIGAMANIA
No. 1 smartphone brand realme Philippines, enters postpaid market with first 5G smartphone
MOST READ
Legislators among those linked to corruption, says DOJ chief
Son of slain peace consultants has message to Sinas
‘This is highway robbery:’ Valenzuela mayor shows traffic jam due to RFID payment system
PH going back to ECQ this Christmas season? IATF says it’s fake news
Don't miss out on the latest news and information.