Jolo after twin blasts: 4 Masses celebrated in other chapels 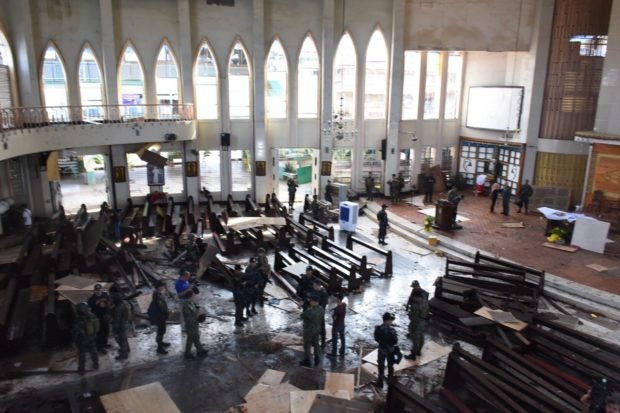 Director General Oscar Albayalde, chief of the Philippine National Police, inspects on Monday, Jan. 28, 2019 the Cathedral of Our Lady of Mount Carmel in Jolo, Sulu, where twin blasts during a Sunday Mass left at least 21 killed and 112 injured. (Photo courtesy of the PNP)

These were the messages imparted to the Catholics who attended four Masses in Jolo, a week after the twin blasts of the Marian Cathedral of the Our Lady of Mount Carmel in Barangay Walled City.

Those blasts killed 21 people and injured at least 111 others.

The four Masses were celebrated in three different places, according to the Rev. Jefferson Nadua of the Oblates Of Mary Immaculate, who is designated spokesperson of the Apostolic Vicariate of Jolo.

Nadua said it was very painful for priests and parishioners to celebrate Masses after the blasts.

“Our concern now is healing, healing the wounds of our people,” Nadua said. “Our call this time, even if it’s very painful to everyone, we have to reflect. Instead of being divided, let this event be an event, a venue to unite, to call for justice, to achieve peace, lalo na sa panahong ito na pure hatred and very divisive yung environment.”

At first, Nadua said he could not think of an appropriate message for the people of Jolo.

“[I don’t know] if it’s a comfort for our victims, or about keeping the faith, or rage and anger or call for calmness and solidarity,” he said. “However, I take comfort and inspiration for receiving messages and request to have our masses at the shattered and desecrated place of worship, a symbol of pain and trauma, which we couldn’t do right now.”

This Sunday’s Masses Nadua said were “a statement of faith, faith which has grown stronger and firm — that there is so much to be thankful for than to be broken and sad about while licking our own wounds for healing.”

“Hence, we come as one community of faith,” he said.

The Rev. Ramil Janquin, a diocesan priest for 18 years in Jolo, celebrated Mass at the Sacred Heart of Jesus Chapel, which was bombed on Dec. 25, 2011.

Of this Mass, Janquin said in Filipino: “It has deep significance, especially for us Catholics. We should not be affected, because we still have our deep faith.”

Janquin admitted that there were fewer churchgoers.

“There’s a decrease in attendance. We can’t avoid the nervousness and fear. They’re there,” he said in Filipino.

But, shifting to English, he added: “I congratulate those who attended the Mass today. Despite the fears, they showed their braveness to the whole world. Life has to go on. And it shows how strong our faith is here.”

The Rev. Romeo Saniel, the administrator of the Apostolic Vicariate of Jolo, said all the religious people here had been provided with security.

Some of those whose relatives died in the cathedral blast last Jan. 27 shared their thoughts with the Inquirer.

Edward Non recalled that for her mother, Fe Non, who was among those who were killed in the cathedral blasts, went to church daily.

“I even cautioned her to stop going to church for a while because of the continuous threat,” Non said. “But she told me that I’d rather die in the hands of our Lord. I will take my death peacefully if I die inside the house of God.”

Aubrey Reyes said what consoled her and her brother, Lloyd Joshua, was that their parents, Romulo and Leah Reyes, “died together inside the place where they spent so much time sharing their beautiful voices and music.”

Another fatality was Daisy Barade de los Reyes, a former president of her Parish Pastoral Council.

Her husband, Arthur de los Reyes, said: “My wife was preparing to go to the Vatican. She was informed that she is one of those chosen. My wife is very religious. What made us, me and my seven children, accept [her death was that] she went much higher than the Vatican. She is now with our Creator.” /atm