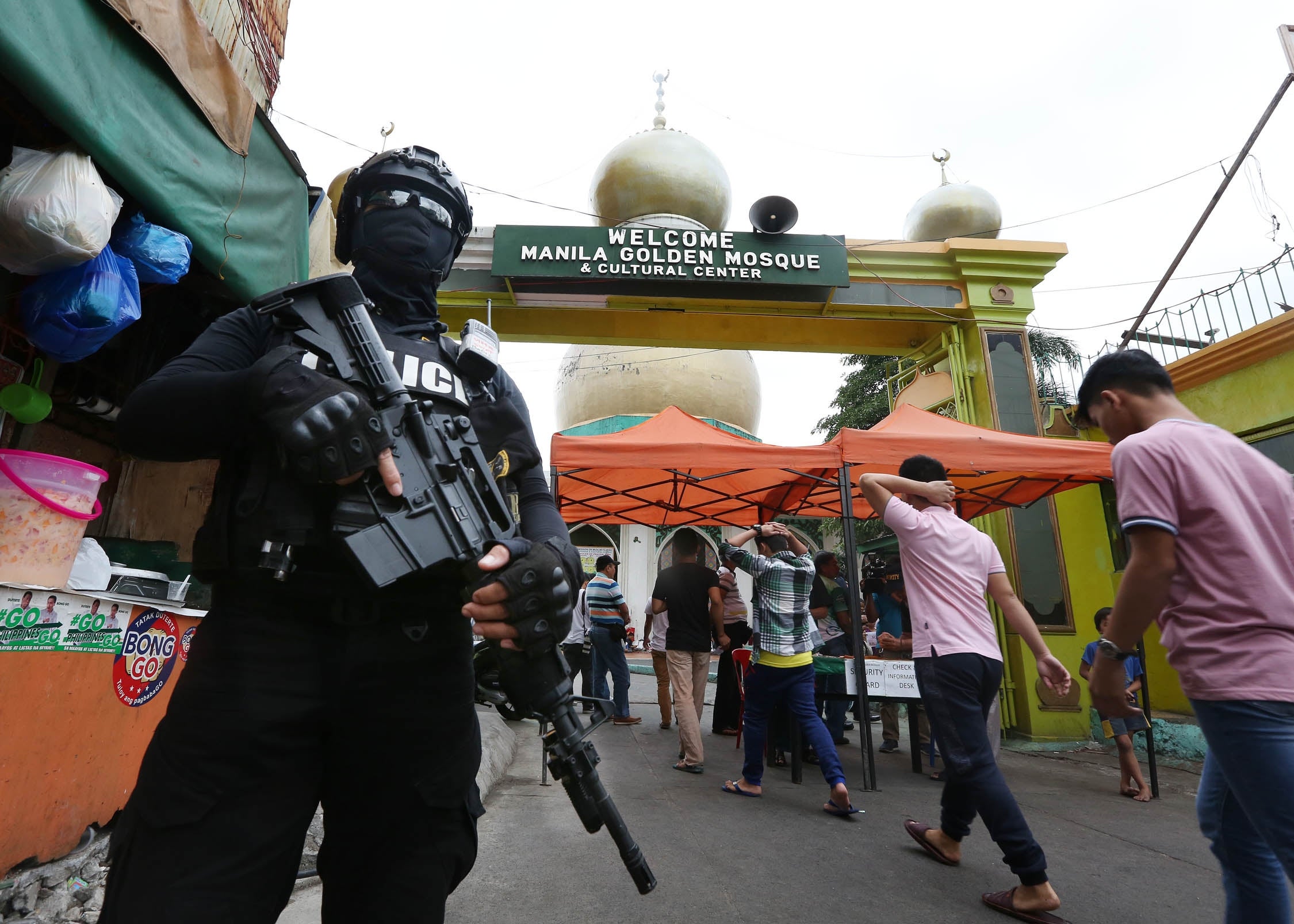 ON ALERT Police provide tight security to a gathering of Muslim residents at the Golden Mosque in Quiapo, Manila, on Friday. -MARIANNE BERMUDEZ

Interior Secretary Eduardo Año on Friday said an “Indonesian couple” was behind the bombing of the Catholic church in Jolo, Sulu province, on Sunday that killed 22 people and wounded 123 others.

Speaking to the delegates in the Barangay Summit on Peace and Order in Palo, Leyte province, on Friday, Año said the Indonesians were assisted by Abu Sayyaf bandits.

“[I]t was the Abu Sayyaf [members] who guided them, studied the target, did reconnaissance and surveillance work, and brought the couple inside the cathedral,” he said.

In a television interview, Año said the male Indonesian was known as “Abu Huda,” among several aliases, and had been in Sulu “for a long time.”

Several witnesses pointed to the man’s female companion as the one who placed the bomb inside the Cathedral of Our Lady of Mount Carmel.

Año quoted witnesses as saying the woman actually remained in her seat, next to the bomb, and may have died in the blast.

“The purpose of the [Indonesian] couple is to set an example and influence Filipinos to become suicide bombers,” Año said, adding that no Filipino has conducted a suicide bombing so far.

Ano’s remarks are the latest twist in a probe that has been fraught with inconsistent and sometimes contradictory accounts from authorities and, according to one investigator interviewed on TV, complicated by a contaminated crime scene.

Security officials had initially said the two bombs were remotely detonated, but by Tuesday, that changed after the President said an Indonesian couple may have carried out the suicide bombing, a view supported by Defense Secretary Delfin Lorenzana.

Lorenzana on Friday said some of the unclaimed body parts—a pair of skulls and two pairs of feet—possibly belonged to the “male suicide bomber” who set off the second blast a minute later outside the church.

Año, a former military chief, said Daulah Islamiyah (DI)—which is comprised of the Abu Sayyaf, the Ajang-Ajang, and other local groups that have pledged allegiance to Islamic State—was targeting “progressive cities” in Mindanao for attacks, but that martial law was hampering their movement.

The Jolo twin bombings, the  Zamboanga mosque blast and the Lamitan bombing last year “were all DI projects,” Año said.

“They want to raise terror wars to religious levels, that’s why they choose churches and cathedrals like they did in Indonesia,” he said.

In Jolo, Mayor Kherkar Tan expressed doubts about the effectivity of government security measures before the blasts.

Tan appealed to human rights groups to conduct “an independent fact-finding” investigation of the attack.

“I fear this bombing might end up being whitewashed,” he said.

Senior Supt. Pablo Labra II, police director of Sulu, said two sets of body parts found in the vicinity of the church could be those of the bombers.

No one has claimed the two bodies and no one among the families of blast victims, either the dead or the wounded, reported any missing body parts, he said.

Fr. Jeff Nadua, spokesperson for the Vicariate of Jolo, said all the church parishioners had been accounted for. —WITH REPORTS FROM JULIE M. AURELIO