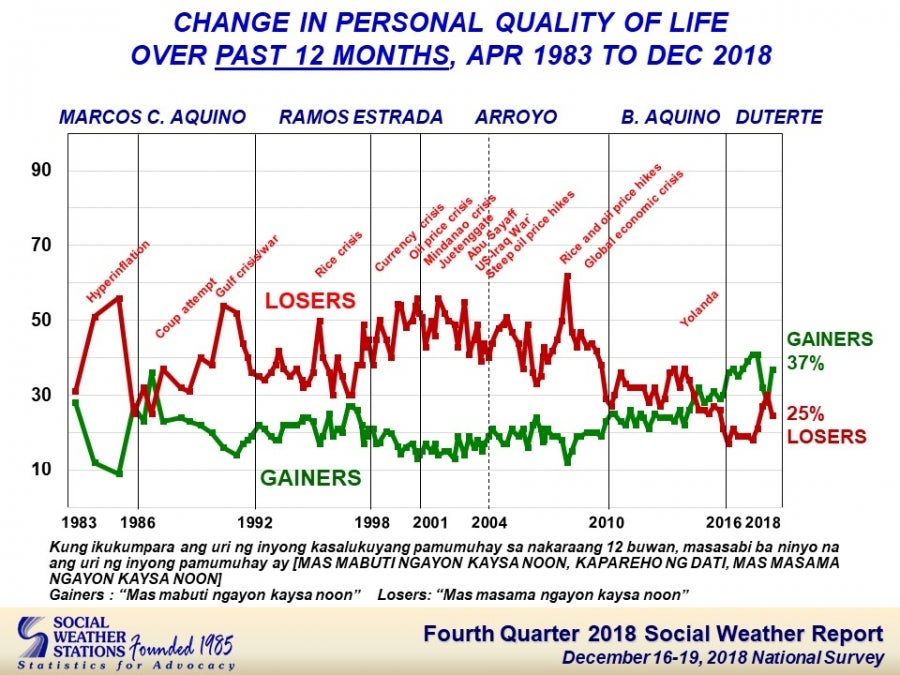 More Filipinos claimed they had better lives in the past year compared to the years before, according to a December Social Weather Stations (SWS) survey, which also found increased optimism on the quality of life and Philippine economy in 2019.

Results of the survey, conducted from Dec. 16 to 19 last year, found 37 percent of the 1,440 respondents saying their lives had improved (gainers) over the past 12 months while 25 percent said their lives worsened (losers), resulting in a net gainers score (gainers minus losers) of “very high” +12.

Nearly half or 45 percent were optimistic that their quality of life would improve in the next 12 months, as against 5 percent who said it would get worse, for an “excellent” net optimism score (optimists minus pessimists) of plus +40, an upgrade from the “high” +27 (36 percent optimists, 9 percent pessimist) in September.

The percentage of those who feel optimistic about the economy also rose, from 31 percent to 43 percent, while the pessimists declined from 20 percent to 11 percent.

The survey used face-to-face interviews and had a margin of error of plus or minus 2.6 percentage points.

Between September and December, net gainers, net personal optimists and net economic optimists increased across all areas and classes.

By area and class, net personal optimism ranged from “very high” to “excellent.”

Net economic optimism was “excellent” across all areas and classes.—INQUIRER RESEARCH