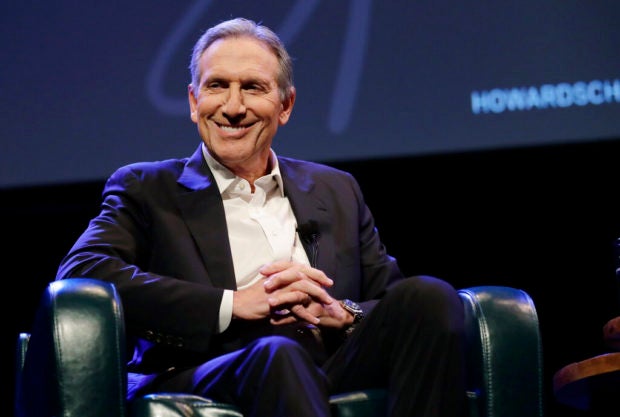 Former Starbucks CEO Howard Schultz speaks  on Jan. 31, 2019, at an event to promote his book, “From the Ground Up,” in Seattle.  AP

SEATTLE — “Grande ego. Venti mistake”: That was the message protesters had for former Starbucks CEO Howard Schultz as he returned to his hometown of Seattle on Thursday after announcing that he’s mulling an independent run for president.

Several dozen protesters gathered outside a downtown theater before Schultz appeared to promote his new book. They included Democrats who fret his candidacy would hand President Donald Trump another term, and green-and-gold-bedecked basketball fans who haven’t forgiven him for selling the Seattle SuperSonics to a group that moved the team to Oklahoma City more than a decade ago.

“The way he dealt with the Sonics shows a huge fault in his character,” said Farheen Siddiqui, 26, who wore a team jersey to the protest. “He acted like a child who was not getting his way.”

The 65-year-old billionaire and Democratic donor, who stepped down as Starbucks chairman last June, has been on a tour of talk shows and news interviews the past few days, coinciding with the release of his latest book, “From the Ground Up: A Journey to Reimagine the Promise of America.”

He said he doesn’t intend to decide whether to run for president for several months, but the reaction from prominent Democrats has been swift. The party chairwoman in Washington state, top advisers to former President Barack Obama and the most powerful political action committee in Democratic politics are among those who have criticized him, saying an independent bid would likely split the opposition to Trump and make his re-election more likely.

The protesters outside his talk Thursday chanted: “Pick a party.” Some carried signs decorated like Starbucks cups that read “Compost your campaign” and “Grande ego. Venti mistake” — a reference to the Italian names for drink sizes at the coffee chain.

At an appearance in Arizona on Wednesday Schultz said he would “not do anything to be a so-called spoiler” who hands the 2020 race to Trump.

In Seattle, where 92 percent of voters cast ballots against Trump in 2016, helping get him re-elected might be even less popular than selling off a beloved sports franchise.

Chris Petzold, a Democratic activist from the Seattle suburb of Issaquah, organized the protest Thursday. She said she remains sad about the Sonics departure, but the protest isn’t about that.

“Now is not the time to risk getting another four years with Donald Trump as president,” Petzold said. “If you want to fix it, why not fix it from within the system, instead of being your arrogant billionaire self? He’s just buying his way into this.”

Schultz has repeatedly said he doesn’t want to be responsible for Trump’s re-election, but that he believes there is a way to unite a significant portion of the public that identifies with neither major party.

In an opinion piece published Wednesday in The Seattle Times, Schultz acknowledged that he has a “complicated” relationship with Seattle, a city he first fell in love with during a visit to Pike Place Market in 1981. It’s the city where he grew a small coffee-roasting company into an inescapable global chain, where he and his wife raised their two children, and where the couple still lives.

Along the way he made Starbucks one of the first US companies to offer stock options and health insurance even to part-time employees; more recently, it partnered with Arizona State University to cover tuition for workers who want to earn their bachelor’s degrees online.

In 2001, Schultz led a group of investors in buying the Sonics and the WNBA’s Seattle Storm for $200 million. Due partly to an unfavorable lease deal and the small size of KeyArena, where the team played, the Sonics were losing millions of dollars a year.

After being rebuffed by the Legislature in his efforts to win public funding to remodel the venue, Schultz sold the team for $350 million to the group that moved it to Oklahoma City and renamed it the Thunder. The Sonics were Seattle’s oldest professional sports franchise and the first Seattle team to win a national title since the Seattle Metropolitans won hockey’s Stanley Cup in 1917.

“I was so focused on getting myself and others out of a money-losing situation that I made a bad choice and failed to follow a principle that helped me grow Starbucks, which is to try to balance profit with humanity,” he wrote. “Selling the Sonics is the biggest regret of my professional life. … I do not expect my actions to be forgiven or forgotten.”

Some Sonics fans considered the apology long overdue — not to mention suspect, given that it coincided with the announcement of his presidential musings.

Schultz’s politics aren’t necessarily going to win him many fans in his liberal hometown, either.

In Seattle, voters rarely see a tax increase they don’t like; Schultz has called for entitlement reform and branded the calls of Sen. Elizabeth Warren and other Democrats for big tax increases on the ultra-rich “ridiculous.”

Seattle was one of the first US cities to approve a $15-an-hour minimum wage; Schultz opposed it, fearing it would cost jobs. The law remains popular, and economists say it has raised pay without any real impact on employment.

Schultz’s consideration of a presidential run even drew a rebuke from a fellow Seattle billionaire, early Amazon investor and outspoken liberal Nick Hanauer.

“What Howard calls ‘centrism’ is just trickle-down economics_tax cuts for the rich, de-regulation for the powerful, and wage suppression for everyone else,” Hanauer tweeted. /ee