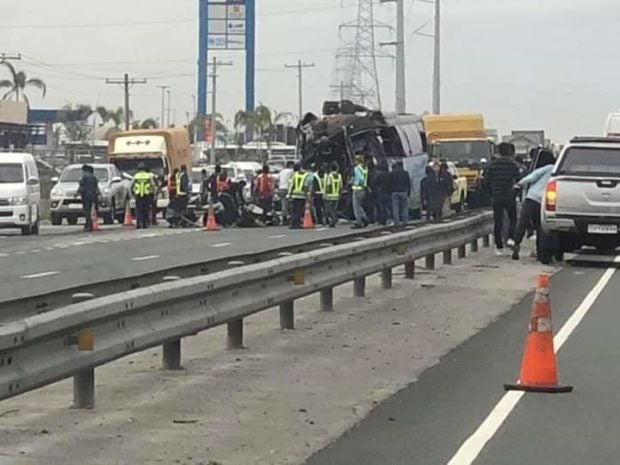 SCTEx personnel and kibitzers look at the wreckage of the passenger bus that reportedly rear ended a cargo truck along the Subic-Clark-Tarlac Expressway (SCTEx) in Concepcion, Tarlac, on Thursday morning. CONTRIBUTED PHOTO

MANILA, Philippines  – The Land Transportation Franchising and Regulatory Board (LTFRB) on Thursday said it will issue a preventive suspension order on the bus company that was involved in a deadly accident along the Subic-Clark-Tarlac Expressway (SCTEx) in Concepcion, Tarlac.

In a statement, the LTFRB said it would issue a preventive suspension order on the bus units of Jumbo Transport Inc. after one of its tourist buses collided with a truck along SCTEX, killing five people and injuring 49 others.

“The insurance company initially released P400,000 to cover insurance assistance of victims pending verification of all claims,” the LTRFB said.

Upon investigation, the LTFRB said that the bus firm has a tourist franchise with ten units starting July 5, 2016 and an approved route from Las Piñas to any point in Luzon.

On Thursday morning, the ill-fated tourist bus,  which was carrying mostly government employees from Cavite, rear-ended an 18-wheeler truck along SCTEx in Barangay Santiago in Concepcion, Tarlac at around 5:20 a.m. /gsg