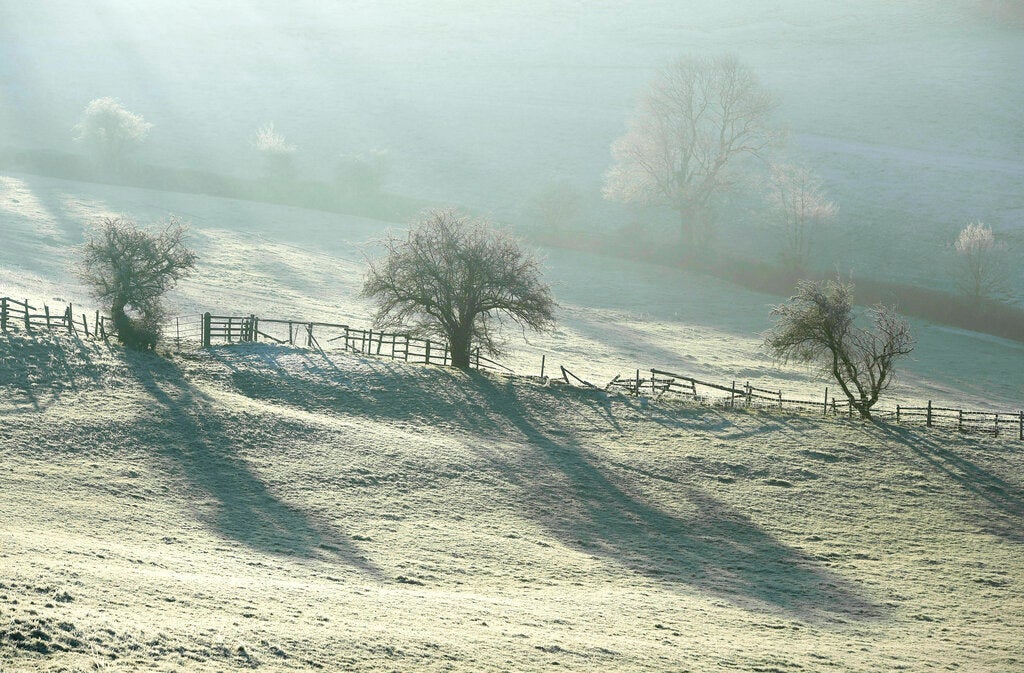 Frosty fields near Oakham, central England, Thursday Jan. 31, 2019, as the cold snap in Britain continues to cause icy conditions across the country. (Joe Giddens/PA via AP)

STOCKHOLM — The Swedish weather service said Thursday temperatures of -39.5°C (-39.1°F) have been recorded in northern Sweden, the coldest recorded this month.

The Swedish Meteorological and Hydrological Institute said the cold temperature was measured in the Swedish town of Nikkaluokta in Lapland, which covers the northern parts of Norway, Sweden, and Finland.

The service added, however, that on average January has been “warmer than normal.”

Sweden’s news agency TT reported that the coldest temperature ever recorded in Sweden was -52.6°C in 1966 in Lapland.

In Britain, officials recorded the coldest night this winter so far with temperatures dipping to -11°C in Scotland.

The cold snap prompted cancellation of some train services, while Manchester and Liverpool airports were brought to a standstill on Wednesday.  /kga

Read Next
Sour surprise for sweets: Brexit may raise German candy cost
EDITORS' PICK
Look Through: The fate of impounded stray dogs
House energy committee chair Arroyo bats for cheap electricity
What to watch out for when selecting a video surveillance solution
23,000 cops to be deployed nationwide for school reopening
Unleash the photographer in you this World Photography Day with vivo smartphones
DOH says COVID-19 cases plateauing, but public shouldn’t be ‘complacent’
MOST READ
Sharon Cuneta asks for prayers for friend in ICU who suffered silent stroke
Light therapy could be the answer to your sleep problems
Korina Sanchez reunites with former ABS-CBN co-anchors Julius Babao, Cheryl Cosim
PBA: San Miguel ousts Meralco to arrange finals duel vs TNT
Don't miss out on the latest news and information.