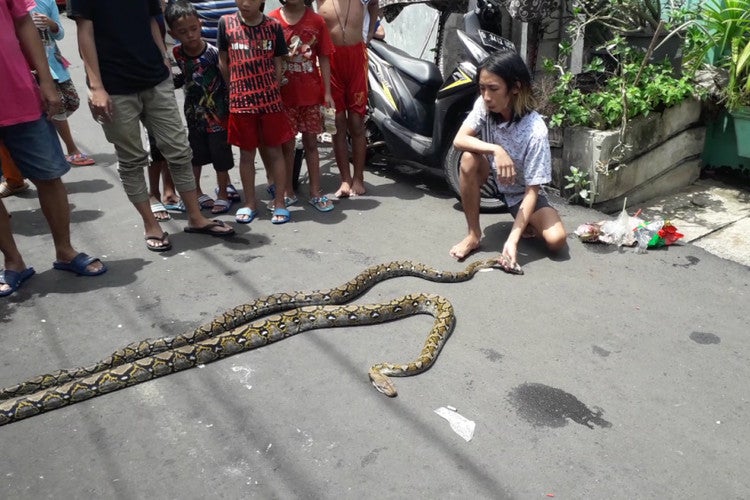 Children and residents of Jl. Lorong Z Timur in Koja, North Jakarta, crowd around two pythons found in their neighborhood on Jan. 30. Photo from kompas.com/Ardito Ramadhan D via The Jakarta Post

JAKARTA — Floods have swept pythons into residential areas in Greater Jakarta in the last three days, with two appearing in Koja, North Jakarta, on Wednesday morning.

Koko, a resident of neighborhood unit RT 01, community unit RW 03, in Koja, North Jakarta, said he found two pythons on Jl. Lorong Z Timur. “[The pythons] might struggle with the flooding, so they leave their nests,” Koko said as quoted by kompas.com.

He recalled that the snakes were found in different places at different times. The first was found inside a water channel, while the other was found by the river.

Koko claimed he was able to tame the pythons when locals tried to catch the animal, adding that snakes appeared quite regularly in the area during rainy season.

“There has yet to be any encounters [between locals and pythons], but the appearance of pythons is worrisome because many children live here,” he said.

Previously, on Tuesday, a 4-meter python, which was purportedly carried by floodwaters, also made a surprise appearance in a housing complex in Kalideres, West Jakarta.

On Sunday, another python also made an appearance in a housing complex in Kaliabang, Bekasi, West Java. The python bit Maman, who was trying to catch it.

While on Jan. 14, South Jakarta Fire and Rescue Agency personnel removed a 4-meter-long snake from a house’s plumbing system in Lenteng Agung.