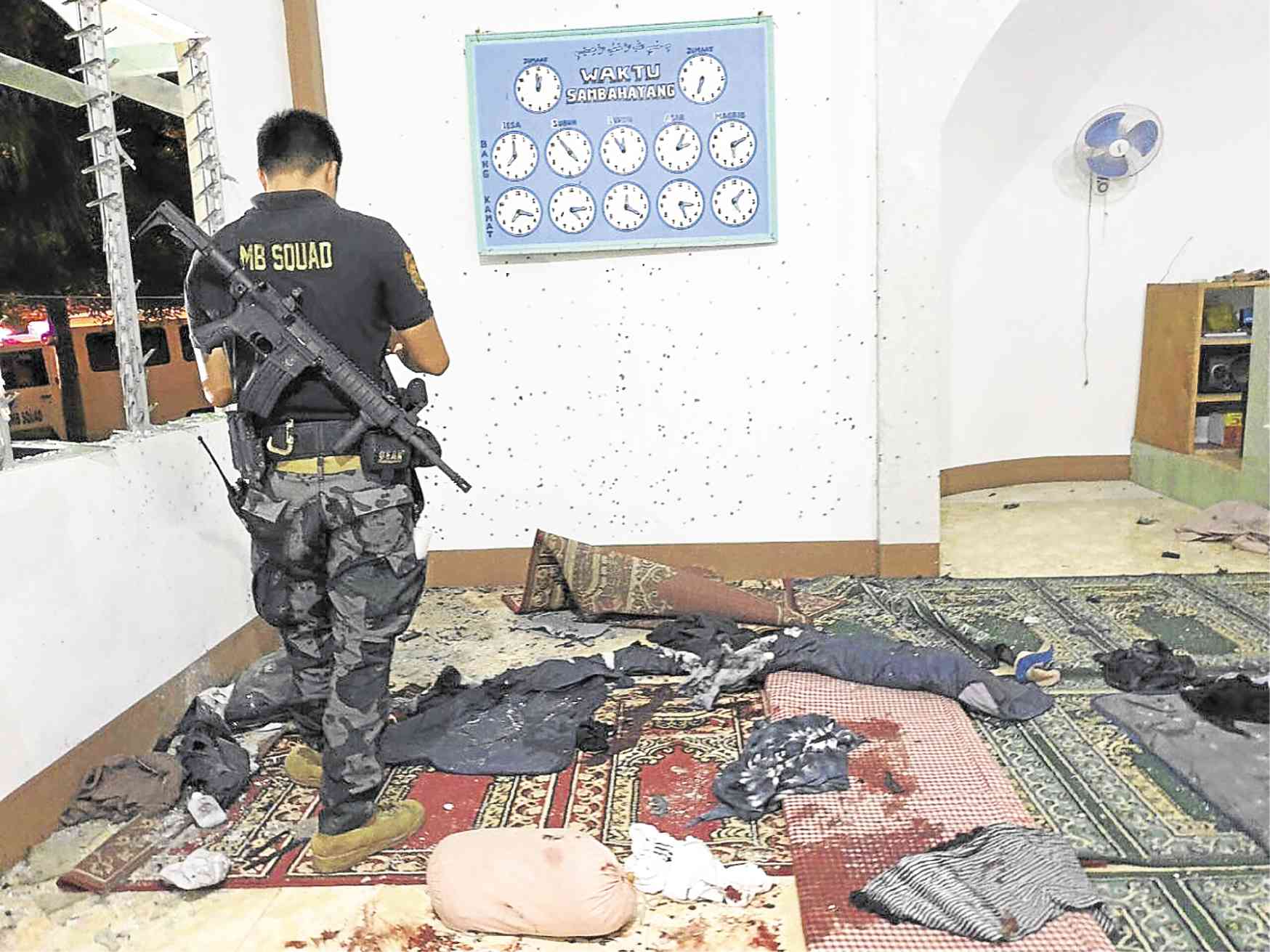 SCENE OF THE CRIME. A police investigator examines the messy aftermath of a grenade explosion at a mosque in Zamboanga City on the morning of Wednesday, January 30, 2019, or three days after twin bombings ripped through the Cathedral of Our Lady of Mount Carmel in Jolo, Sulu province. —PHOTO COURTESY OF WESMINCOM

MANILA, Philippines — Police are looking at two “persons of interest” in the grenade explosion at a mosque in Zamboanga City on Wednesday, January 30, which killed two Islam preachers and wounded four others.

“Kasalukuyan ngayong hinahanap at kinikilala ang mga persons of interest na ito (We are currently looking for and tracing the identity of these persons of interest),” said Sr. Supt. Bernard Banac, spokesperson of the Philippine National Police (PNP), during a press briefing Thursday, January 31.

No closed-circuit television cameras were installed in the area, according to Banac, who also disclosed the suspects seemed to have switched off or destroyed a nearby light post before lobbing the grenade at the mosque.

Chief Supt. Emmanuel Licup, director of PNP-Region 9 (Zamboanga Peninsula), told INQUIRER.net it was eyewitnesses who pointed to the two persons of interest in the deadly incident.

Licup declined to divulge further information about these persons due to an ongoing investigation, except that one of them is involved in a group that also launched a bombing in the same area some 10 years ago. /kga

Read Next
Peace with Taliban? Trump warned of Afghan pullout risks
EDITORS' PICK
Cebu City closes its borders
IATF: Food firms to operate with 50% of workforce during Luzon quarantine
BREAKING: 1,075 people in PH has coronavirus disease – DOH
UP-PGH wards for COVID-19 patients finished in 5 days
Style and music journeys with Claudia Barretto
DILG to stranded workers: ‘Stay where you are’ until Luzon-wide quarantine is over
MOST READ
Locsin blasts DOH for blocking entry of Chinese doctors
Another doctor dies due to COVID-19 in Cebu City, doctor-husband critical
DOH pressed to expand, speed up virus testing
No more bread? Company forced to limit production
Don't miss out on the latest news and information.