newsinfo / Headlines
Headlines
COMMUNITY EFFORT ALL FOR A CENTURY-OLD TREE

Marikina folk save storm-toppled symbol of their grit 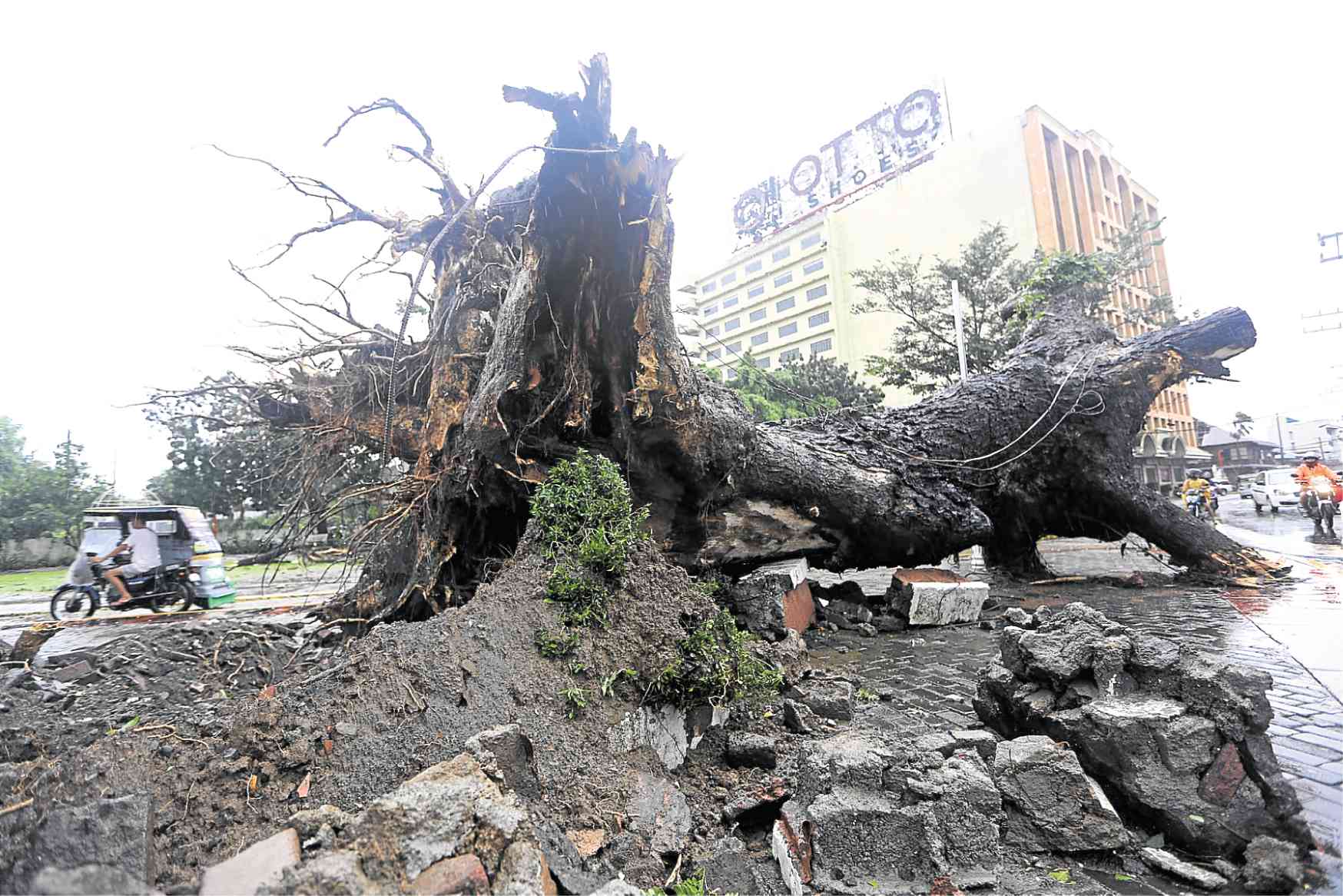 TREASURED ACACIA The “heritage tree” after suffering the wrath of Typhoon “Ompong” on Sept. 14, 2018

On a stormy September afternoon last year in Barangay San Roque, Marikina City, a tornado formed over the river and swept across the street, hurling debris and battering structures that stood in its path.

Stepping out of their homes and shops later to see the damage, residents were particularly disheartened to see a cherished feature of the local urban landscape violently toppled and seemingly beyond saving.

The century-old acacia tree lay on its side, the trunk blocking JP Rizal Street, half of the roots unearthed and exposed.

It felt like the end for one of the enduring witnesses to Marikina’s history, particularly the growth and struggles of its footwear industry. The tree had stood for years, like a loyal guardsman, just outside the city’s Shoe Museum.

It had also endured countless storms for decades — notably “Ondoy” which unleashed killer floods in the city in 2009 — that residents somehow considered it a symbol of their own survival and resilience.

The value they attached to it was given official expression in 2016 when the Department of Environment and Natural Resources recognized it as one of the last two “heritage trees” Marikina had managed to preserve.

On Sept. 14, 2018, however, a “buhawi” spawned by Typhoon “Ompong” (international name: Mangkhut) on Marikina River tore through San Roque, strong enough to uproot the tree.

Even in the ensuing power blackout, word quickly spread about what happened to the acacia, that within hours no less than Mayor Marcelino Teodoro came to personally see how bad the damage was.

“There was a woman (at the site) and she was sad,” Teodoro recalled. “She started telling me her story relating to that tree, then more people came to me to share their own memories: That they used to play around it when they were kids and hung around it in the late afternoons as they got older.”

Almost as tall as a three-story building, the acacia provided rest and shade for Marikina folk and visitors alike, a cool spot for hailing a jeepney or tricycle.

Strollers going to the Our Lady of the Abandoned Church and Kapitan Moy Residence, two of the local historic sites promoted by the city, could enjoy an oxygen break under its lush canopy.

Teodoro, hearing the residents’ stories, knew that the local government “cannot simply give up” and let the tree die just like that. “Some people were already asking us for a piece of the trunk or a branch, but I said no because we will try to save it.” 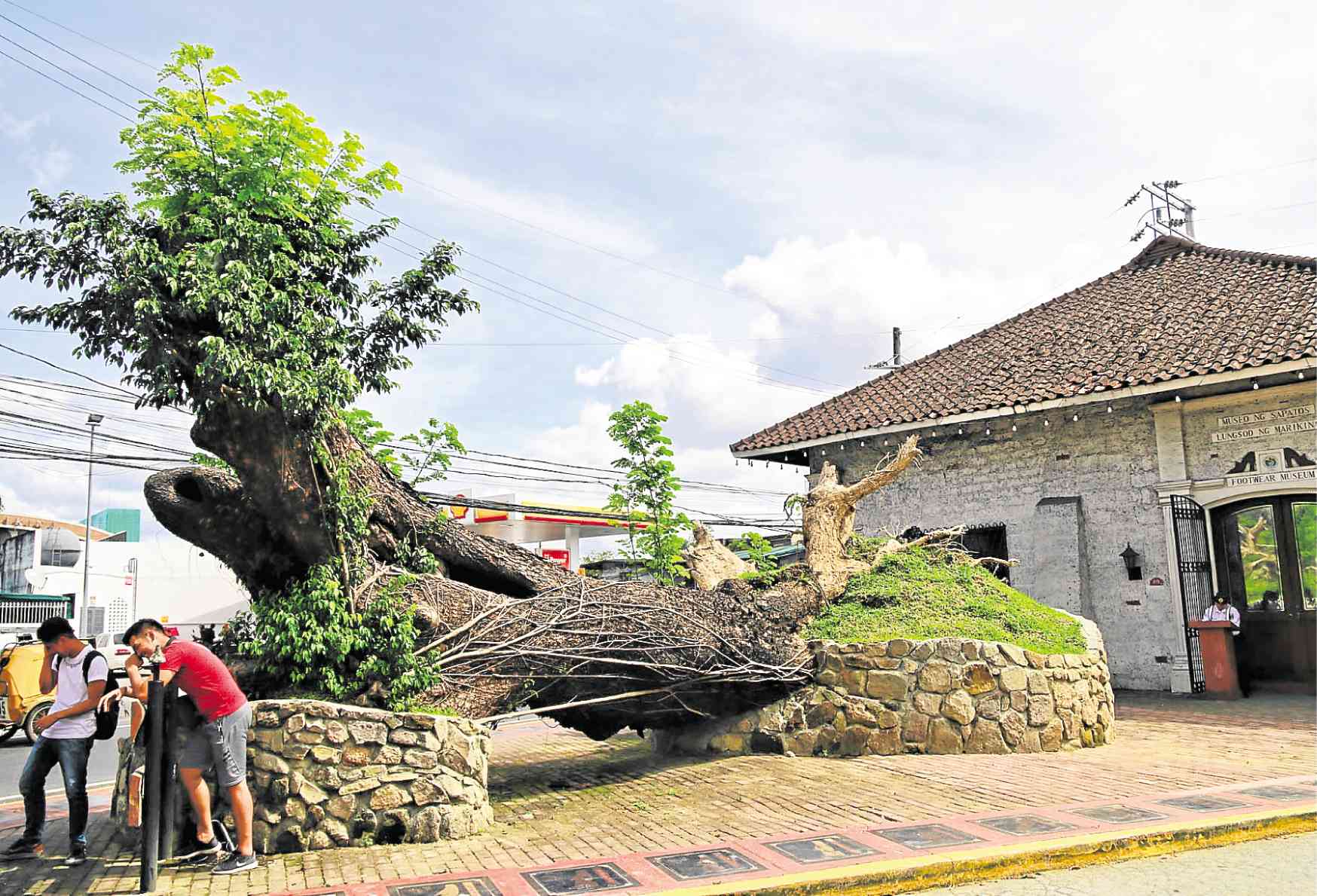 After it was restored in front of Marikina City’s Shoe Museum. —NIÑO JESUS ORBETA, JHESSET ENANO

And so the Marikeños went to work. Among the first responders was Darrell John Felipe, a human resource management officer at City Hall who also heads the Marikina Bonsai Club.

“I already knew that it was worth saving, most especially because this tree is a witness to our history,” said Felipe, who was there when a team performed first-aid measures by covering the exposed roots with cloth and applying sealant on the trunk’s “open wounds” to prevent further moisture loss.

Root inducers were used and — instead of raising the fallen trunk back to a vertical position — circular ripraps were built to support it on two points, the adobe sourced from the Marikina River.

Felipe said bonsai techniques had since been used to revive the acacia.

Today, new growths of green can be seen sprouting from the massive trunk.

To further protect the tree, this time from man-made injuries, the city government is strictly enforcing a 1997 ordinance penalizing unauthorized cutting, pruning and other activities that can damage trees grown in public spaces.

All these efforts didn’t go unappreciated by longtime residents like Pedro Mangulabnan, 83, a retired shoemaker who—until he died in December last year — could be seen spending an hour or more next to the tree almost every day to check its health.

Sometimes, Mangulaban could also be heard reminding City Hall personnel who happened to be passing by that the soil was already parched and the tree needed watering, according to his daughter Emily, who herself had spent playful times in the tree’s shade as a girl.

These communal experiences, Teodoro said, made the tree a certified Marikina treasure.

“It represents (our) resiliency as it was the community itself that nursed it back to life,” he said. “It is a reminder that whatever happens, whatever calamity we face, we will continue to rise and life will always find a way to sprout.”

Read Next
Baguio chill drops to new low ahead of flower fest
EDITORS' PICK
PH COVID-19 cases near 19K mark, as recoveries breach 4,000
Cherry Mobile teams up with Cloud Panda PH, launches online store
Año vows intensified anti-drug campaign as lockdown eases
South Korea clamps down again as virus rebounds
Senate probe on status of PH internet connectivity amid ‘skyrocketing’ demand pushed
Leveling up your ‘lutong bahay’ with the kitchen companion you never knew you needed
MOST READ
Calida ‘just the lawyer, not the client’ and must ‘never lose his cool’ – Macalintal
7 members of nurse’s family in Laguna catch COVID-19
PH COVID-19 cases near 19K mark, as recoveries breach 4,000
Amid protests, Trump talks of war — and reelection
Don't miss out on the latest news and information.