PNP: 2 leaders of militant groups not missing but arrested 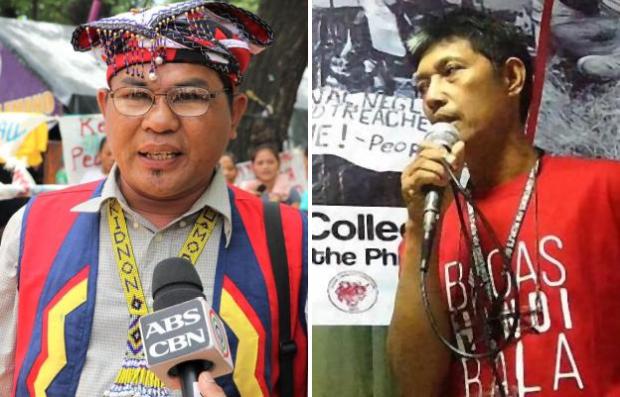 CAGAYAN DE ORO CITY – Leaders of militant groups who were reported to have been missing since Monday, Jan. 28, were actually arrested by authorities to face criminal charges, the Northern Mindanao Police Regional Office (PRO) said on Tuesday.

Arrest warrants were issued against them by Judge Emmanuel Pasal of the Cagayan de Oro Regional Trial Court Branch 38.

“They are not missing,” Chief Supt. Timoteo Pacleb, director of the Northern Mindanao PRO, said in a statement. “Udarbe and [Goayon] were arrested at Barangay Patag by virtue of a court-issued arrest warrant according to our records.”

Udarbe and Goaynon, whom the police accused of being New People’s Army (NPA) leaders, were handcuffed early Monday in downtown Cagayan de Oro.

According to Pacleb, both claimed they were farmers, but the arresting officers seized from them firearms, fragmentation grenades, and subversive documents.

Udarbe and Goaynon will undergo “inquest proceedings in court for illegal possession of firearms and explosives,” according to Supt. Surki Sereñas, said spokesperson of the Northern Mindanao PRO.

Prior to his arrest, Goaynon filed a complaint against the Army’s 65th Infantry Battalion for “harassment and forced surrender,” according to Karapatan, a nongovernment human rights organization.

But colleagues said, the two were last seen leaving Bulua,Cagayan de Oro around 10 a.m. on Monday to attend a meeting with members of Pig-uyonan, a local chapter of Kalumbay, a lumad organization in Bukidnon, according to a colleague, who was worried over their safety.

Fr. Allan Khen Apus, speaking for Karapatan in Northern Mindanao, said the two had texted that they were stuck in traffic around 11 a.m. on Monday.

“The two never got to their meeting place,” Karapatan, who reported their disappearance, said. “None of their relatives or friends have seen or heard from them afterwards.”

In a statement, Karapatan Secretary-General Cristina Palabay said that what happened to Udarbe and Goaynon was just one of the many instances of harassment against leaders of militant groups, especially peasants and tribal peoples. /atm