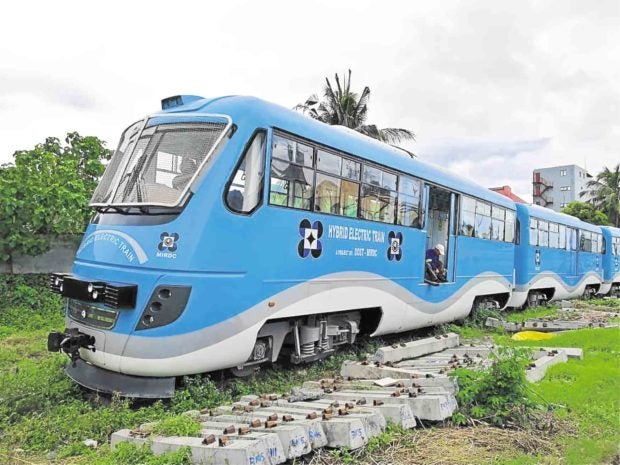 TRAIN OF THE FUTURE This sleek, light blue hybrid electric train is expected to join the regular fleet of the Philippine National Railways in April. —Krixia Subingsubing

In 2013, a team composed of 10 engineers from the Metal Industry Research and Development Center of the Department of Science and Technology (DOST) were supposed to salvage parts from boogeys (undercarriages) of old Philippine National Railways (PNR) trains to improve those still running.

“Then we thought, why not make the first Filipino-made prototype for a train?” Pablo Acuin, the team leader, told the Inquirer.

In November 2015, Acuin’s team finished working on a sleek, light blue hybrid electric train (HET) that could operate on either diesel or batteries.

The P120-million electric-powered train is one of the three mass transit technologies the DOST has developed over the years.

The other two are the hybrid electric road train (without tracks) in General Santos City and the automated guided transit system (monorail) on the University of the Philippines campus in Diliman, Quezon City.

Should the new train pass validation tests (150 hours of running time with passengers on board), it would be added to the regular PNR fleet starting April 1, plying the Calamba-Alabang route, according to Jocelyn Geronimo, PNR assistant general manager.

“It’s just a matter of complying with our requirements,” Geronimo said on Monday afternoon, adding: “This means passing the validation tests, readying our people on how to operate the train and [putting] into writing a training manual for our PNR drivers.”

This is a positive development for the first Filipino-made hybrid electric train that has yet to be deployed more than three years after its completion.
Road block to deployment
Part of the problem, said Geronimo, was that the PNR was hard-pressed to provide the ideal conditions for testing its performance.

Before the validation tests, the train needed to be operated for 5,000 km without any passengers.

But the only available tracks were on the southern segment of the Tutuban-Alabang route.

With hundreds of families living along the tracks, as well as crisscrossing cables dangling overhead, it took some time for the train to rack up the required 5,000 km running hours.

“Normally, running that route should take only two hours. But the train was taking at least four to five hours,” Geronimo said.

Acuin’s team also had to modify certain parts of the train to make it more compatible not just with the PNR system but also with the environment.

This meant, for example, trading the tempered glass windows for polycarbonate and lining it with mesh wire to protect passengers from stones lobbed by mischief-makers—the PNR trains’ worst affliction, Acuin said.

Just as fast and way cheaper to operate and maintain, the DOST train is expected to augment the 11 operational PNR trains, most of which run on diesel, he added.

This makes the HET the more environment-friendly option, Acuin said.

It is also powered by regenerative braking, which means the train transforms the kinetic energy generated during a stop into stored electric power for its generators.

“It’s not a unique technology but it is ingenious,” Acuin said. “It’s minimizing the infrastructure needed to operate the train.”

While it can accommodate only around 800 to 900 passengers compared to the old PNR trains which can ferry 1,100 to 1,200 people, the HET’s capacity should be enough to service the Calamba-Alabang route, which serves about 1,000 people daily.

Acuin said they were hoping to use the PNR run to kickstart the commercial manufacturing of other Pinoy-made trains.

“If we are successful, we can urge bus makers and other industries to partner up with us for mass production. That way we can kickstart production of mass transit technologies for the country,” he added.

Geronimo agreed, saying that “if the government could see that we can build our own trains then there would be no reason not to support [us]. It’s the obligation of the government to make sure there is mass transport for the public and ensure mobility.”