SWS: Most Filipinos agree on 15 yrs old as minimum age of criminal liability

In a survey conducted from July 13 to 16 and Dec. 18 to 22 of 2018, Filipinos were asked if minors should be jailed for crimes such as rape, murder, acting as drug courier and stealing.

The median age of minors used for the survey was 15 years old, according to SWS.

Specifically, for crime of “snatching a cellphone” received a net agreement of -34 (62 percent disagree, six percent undecided, while 28 percent agree). 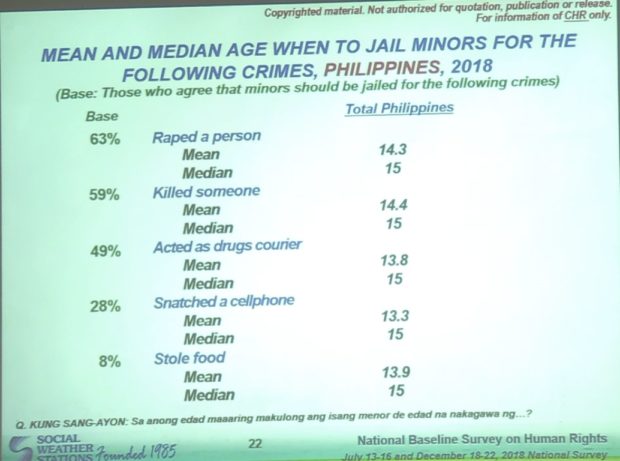 However, a net agreement of +41 (63 percent agree, three percent undecided while 22 percent disagree) was for crime of rape.

For “killing someone,” a net agreement of +35 was recorded (24 percent disagree, four percent undecided and 59 percent agree).

For those who “acted as drug courier,” a net agreement of +14 was recorded (49 percent agree, four percent undecided, and 35 percent disagree).

The survey had 1,500 respondents with 300 each from Metro Manila, Balance Luzon, Visayas, Mindanao and Autonomous Region of Muslim Mindanao. /je