The Makati Police Station apprehended the so-called French “Spider-Man” for causing alarm and scandal and other forms of trespassing.

Authorities said it was bystanders, who witnessed Robert climb up the building, who asked police for assistance. 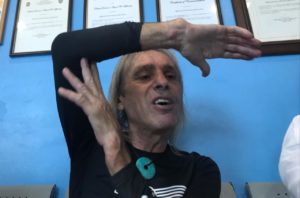 According to Makati police chief Sr. Supt. Rogelio Simon, Robert called his lawyer for a walk along Ayala Avenue when he suddenly climbed the tall building.

“So in a couple of seconds, mataas na ‘yung naakyat niya so hindi na siya pwedeng pigilan, even the security guards,” he added.

Speaking to reporters at the office of the Makati police chief, Robert disclosed he has planned to climb a tower in the Philippines.

He said he had visited the Philippines 20 years back on a holiday, and fell in love with the country.

“I love the Filipinos, I like also the language when they are speaking. It’s very cheerful. And then I always thought that one day I still wanted to come back,” he said.

“Twenty years actually there was nearly nothing in Makati. So I knew that one day I will be climbing in the Philippines,” he added.

The 56-year-old French urban climber said he had done his research on the tower months prior to his arrival in the Philippines.

Robert’s legal counsel Howard Calleja, said his client arrived in the Philippines last Friday with the intent of scaling the 712.93-foot tall building to add to his list of achievements.

“I decided, a few months back, I started to make some research on the Google using also Google earth then I saw that actually this GT International building was kind of easy and climbable for sure,” he said.

According to Simon, Robert started his ascent around 11 a.m. and the French national took about an hour to reach 45th floor and another 30 minutes to descend.

Robert holds the Guinness World Record for the most buildings climbed around the world, including towers in Tokyo, Dubai, and Johannesburg to name a few.

After completing his daring act, police apprehended Robert and brought him to Makati police’s headquarters for documentation and investigation.

Authorities said Robert will face charges of alarm and scandal as well as other forms of trespassing. Both were bailable offenses.

Simon said the climber may have expected his arrest because he brought along his lawyer as he did the bold climb.

Robert underwent the standard booking procedures, and was still at the police station with his legal team, as of this writing, apparently awaiting the filing of cases so he could post bail.

“I feel alive, you know in life. The day I would be stopping [from] climbing is because I’m dead,” Robert explained when asked about what he feels whenever he scales skyscrapers around the world.

“You know I started to climb 45 years ago; this is my path, this is my way of living. It’s as important for me as eating, sleeping, and breathing; and I need that. It gives me life,” he added.

The daredevil defended what others might call as a dangerous stunt, saying he was only entertaining people.

“What I did is, I’m entertaining people for free in the city for some moment, all of this district is very serious, it’s about making money, it’s sometimes having a boring job and then suddenly there is something happening in town which people… they’re having fun,” he said.

“You know, people, they are gathering inside the building, inside the offices. I heard it many times, people usually they are working they are not even knowing each other but because I’m climbing, people are getting closer,” he added. /kga/ac