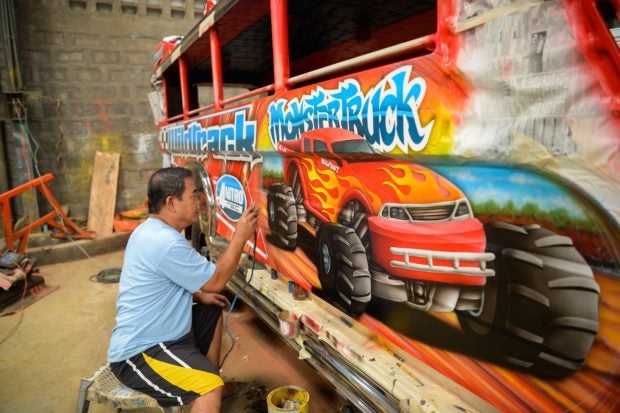 This photo taken on November 29, 2018 shows Vic Capuno, 52-year-old jeepney artist, painting in the side of one of the vehicles at a workshop in San Pablo, Laguna province, south of Manila. – Capuno, a draughtsman by education who went into jeepney painting in 1987, works along with a colleague on three or four jeepneys a month produced by San Pablo’s Armak Motors. As the government runs jeepneys gradually off the road due to pollution and safety concerns, artists like him — and their work — are going too. (Photo by TED ALJIBE / AFP) / TO GO WITH AFP STORY PHILIPPINES-LIFESTYLE-ART-JEEPNEY,FEATURE BY CECIL MORELLA

These rolling art galleries adorned with images of everything from Batman to babies, as well as disco lights and chrome wheels, have for decades provided cheap transport for millions of Filipinos.

But pollution and safety concerns have led to a modernization program, with jeepneys 15 years or older to be taken off the streets by 2020.

“This is an act of treachery against fellow Filipinos,” De la Cruz said. “This is a uniquely Filipino product. We were born with it.”

Only a dozen painters left

When he began 45 years ago, there were hundreds of artists giving the vehicles their boisterous paint jobs. Now, there are fewer than a dozen artists left.

De la Cruz has seen orders decline from a high of 80 a month in the 1980s to just one or two now.

His canvas is being replaced by eco-jeepneys, powered by electricity or diesel motors that cause less pollution.

Riders of old jeepneys have to climb in through a hatch in the rear and cram into two parallel benches inside with no respite from the heat and roadside pollution.

The jeepney’s successor is being billed as a big improvement. It has doors, individual seats, air-conditioning, and enough height to stand up. But it will be mass-produced and will look just like a public bus.

Skipping over the jeepneys’ bespoke production process in small workshops means a loss of the individual style and flair that have made them global symbols of the Philippines.

“It’s one of the most genuine forms of modern folk art that we have,” Bernie Sim, a Manila-based graphic designer and coauthor of a 2014 book on jeepney art, told Agence France-Presse (AFP).

But the jeepneys, which were first made from leftover US jeeps after World War II, have been on borrowed time for years.

Jeepneys are highly polluting, and the Philippines is determined to improve air quality in its traffic-clogged cities.

Jeepney drivers are also notorious for ignoring traffic rules, and their vehicles have few safety features.

On top of that, Metro Manila ushered in internet-based ride-sharing services in 2014. Three years later, President Duterte said the jeepney must evolve or disappear.

A piece of PH culture

“They have all but stopped making jeepneys,” said Vic Capuno, a 52-year-old jeepney artist based in San Pablo City, Laguna province, south of Manila.

As a result, Capuno and a colleague at Armak Motors now paint just three of four jeepneys a month.

De la Cruz, who worked on nine jeepneys last year, is the only painter left at Sarao Motors, once the country’s biggest producer.

Two of his siblings were also jeepney artists, but they died from diseases he believes were caused by inhaling fumes from the paint through the years.

Yet De la Cruz is still passionate about the jeepney’s importance in Philippine history.

“When the jeepney disappears a piece of Filipino culture will also die,” he warned.

‘At times, I cry quietly’

A self-taught painter, De la Cruz was inspired by the work of renowned local artists such Carlos Francisco and Fernando Amorsolo.

His jeepney designs, still seen on the streets for now, chronicle the rapidly changing landscape of his home in the City of Las Piñas from a farming and salt-making backwater into a highly urbanized area.

“It’s a pleasing sight. It brings us back to a time and place that is no more,” De la Cruz said.

After raising four children on his earnings from painting jeepneys, he now also creates canvases and makes storefront signs as a sideline.

He conceded he could have a decent life without the jeepneys, but he was heartbroken by the government’s decision.

“I would like to appeal to the authorities not to outlaw it,” De la Cruz said. “At times, I cry quietly when I think about what is happening.”