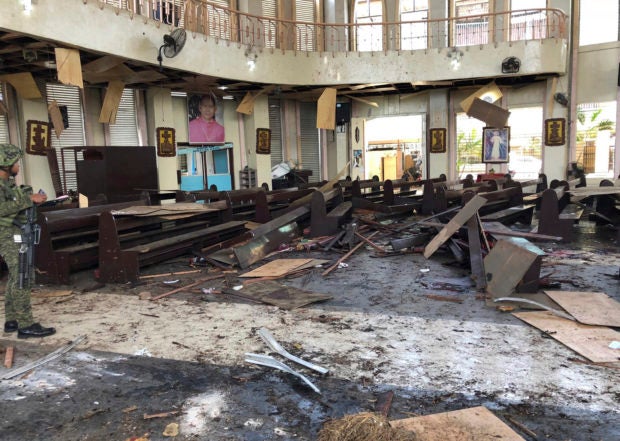 MANILA, Philippines — The Armed Forces of the Philippines is looking into the involvement of the Abu Sayyaf in the deadly explosions in Jolo.

“Based on the CCTV footage recovered by authorities, the Ajang-Ajang group perpetrated the said bombing incident,” the Western Command said in a statement.

The Ajang-Ajang faction is linked to the Abu Sayyaf Group in Sulu.

“The group has been held responsible for killings of law enforcers, particularly soldiers and policemen in Jolo. They are also blamed for other heinous crimes in the area,” the Wesmincom said.

But the Islamic State has also claimed responsibility for the bombings.

Twenty people were killed and at least 100 were injured from the twin blasts that rocked a cathedral during Sunday Mass in Jolo.

The first explosion was inside the cathedral and as security forces rushed to respond, another bomb went off outside.

Sulu is a stronghold of the Abu Sayyaf, one of the militant groups in the island province carrying out bombings, kidnappings, and beheadings.

The deadly explosions came days after a majority of Muslim areas in southern Philippines approved the creation of a new autonomous region in a referendum. Sulu, however, voted against the creation of the new Bangsamoro region. /je