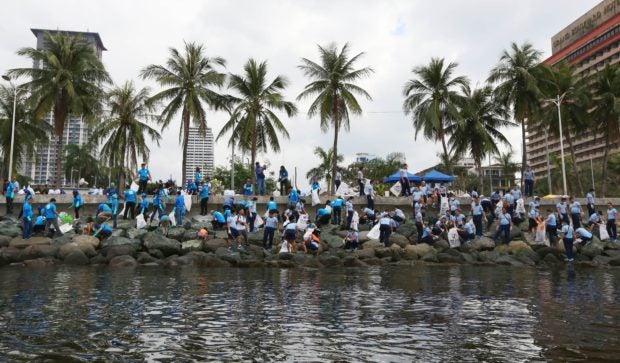 CLEANUP BRIGADE Policemen join the massive cleanup along Roxas Boulevard as the rehabilitation of the heavily polluted Manila Bay kicked off on Sunday. —PHOTOS BY MARIANNE BERMUDEZ

The crackdown has begun.

Three restaurants were slapped with cease-and-desist orders on Sunday after authorities found that they were dumping untreated wastewater into Manila Bay.

Ordered to shut down their water sources and wastewater discharging facilities were Aristocrat Restaurant on Roxas Boulevard in Manila, Gloria Maris Shark’s Fin Restaurant at the Cultural Center of the Philippines complex in Manila, and The Esplanade (San Miguel by the Bay) at the Mall of Asia complex in Pasay City.

The Laguna Lake Development Authority (LLDA), along with the Department of Environment and Natural Resources (DENR), issued the orders as the agencies officially began the “Battle for Manila Bay,” a program to rehabilitate the water body, which environmentalist lawyer Tony Oposa has called Metro Manila’s “toilet bowl.”

The law creating the LLDA places Manila and Pasay under the agency’s jurisdiction, along with Quezon City and Caloocan.

In Bulacan, environment officials have closed 41 smelting firms, tanneries, packaging plants and fishponds in the province as part of the campaign to clean up the bay.

Lormelyn Claudio, director of Environmental Management Bureau in Central Luzon, said the agency had served closure notices on 13 establishments in Obando and Marilao towns and in the city of Meycauayan for operating without an environmental clearance certificate.

Six others in Pasay were issued notices of violation by the LLDA for water pollution.

Aside from the closure of their facilities, the three restaurants face a fine of up to P200,000 daily, starting on the day they received the cease-and-desist orders, said LLDA General Manager Jaime Medina.

Tests done on the wastewater of Aristocrat, Gloria Maris and The Esplanade showed that they had failed the standards set for pH levels and presence of suspended solids, oils and grease, as well as fecal coliform.

The DENR aims to reduce the fecal coliform level of the bay from the current 330 million most probable number (MPN) per 100 milliliters to a more acceptable 270 MPN per 100 ml by yearend.

Medina said the restaurants were previously issued notices of violations but had failed to comply with the standards. For instance, Gloria Maris has been found to be a violator of the Clean Water Act since 2010.

The Esplanade was flagged after LLDA inspectors discovered that some of its tenants had bypassed the sewerage treatment plant and directly dumped their waste into Manila Bay.

While their operations were not entirely stopped, Medina said the orders might eventually lead to closure, depending on their compliance.

“We immediately cut their water source so they would not have any more chances to pollute Manila Bay,” he said.

The Inquirer asked Aristocrat chief operating officer Tony Co for comment but he said the restaurant would issue a statement in due time.

Medina said inspections in hotels, restaurants and other businesses were still going on and that similar orders and notices would be issued in the coming weeks.

In Pasay and Manila alone, the teams had already found 120 establishments without sewerage treatment plants.

The probe forms the first phase of the government’s ambitious rehabilitation plan for the bay famous for its sunset.

More than 230,000 informal settler families living along estuaries and waterways that feed into the bay will also be relocated.

On Sunday morning, heads of agencies involved in the Manila Bay Interagency Task Force led by Environment Secretary Roy Cimatu pledged to rehabilitate the bay at the kickoff of the “Battle for Manila Bay” on Roxas Boulevard’s baywalk.

At least 5,000 people joined the “solidarity walk” at Quirino Grandstand, mostly from the 13 agencies ordered by the continuing mandamus issued by the Supreme Court in 2008 to clean and protect the bay.

“We will be making another history in Manila Bay,” Cimatu said. “We will launch the biggest battle of them all, not against invaders, but against environmental abuse.”

Simultaneous drives were also conducted in the provinces of Bulacan, Bataan, Pampanga and Cavite, which share the bay with the capital along with Parañaque, Pasay, Navotas and Malabon.