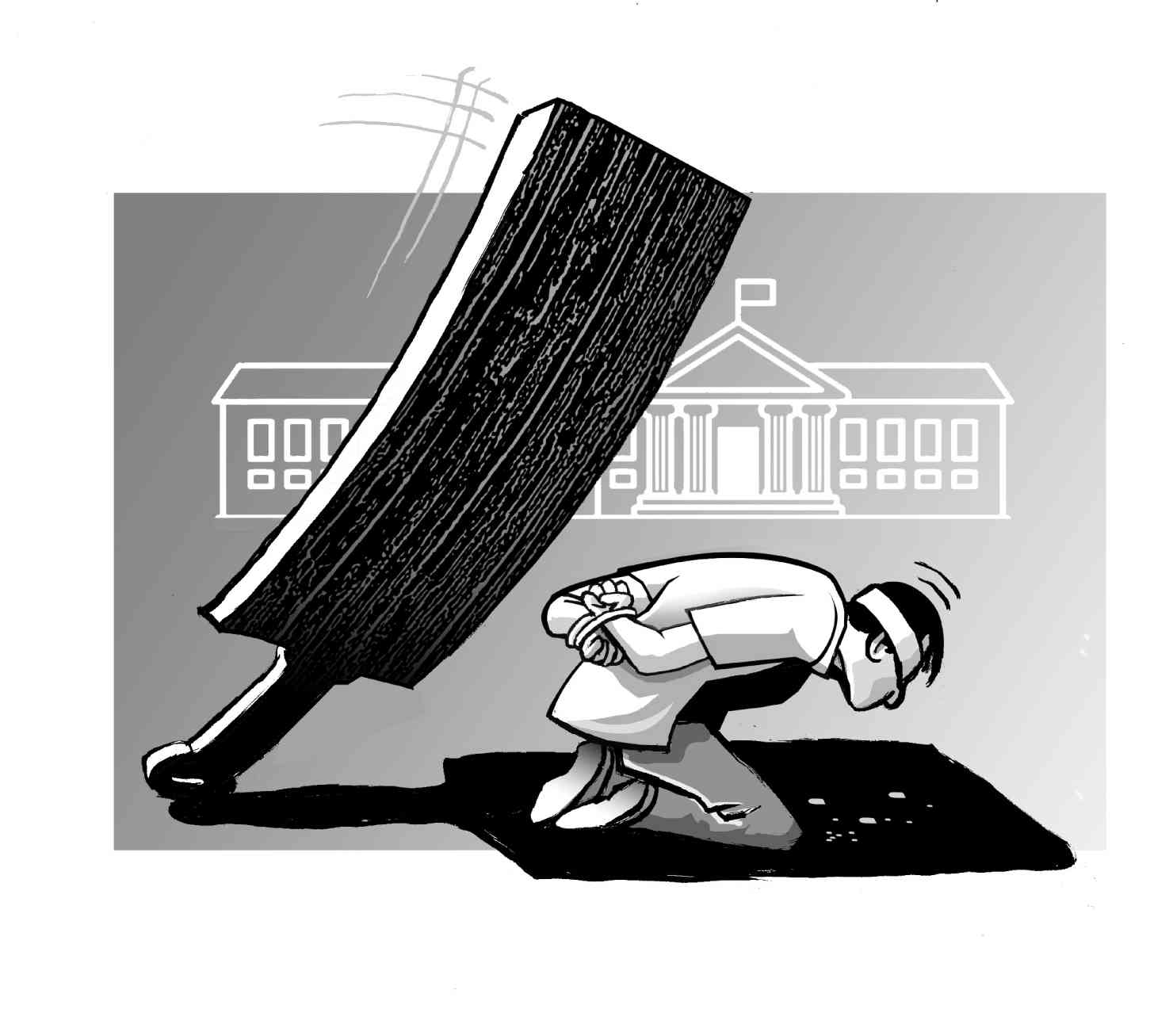 The leaks on social media late in 2018 showing violence in word and deed jarred the University of the Philippines (UP) and Ateneo de Manila University. The twin controversies exposed a sharp contrast in the way educational institutions bring to justice an individual perpetrator and deal with a campus organization that appears to operate by its own rules.

At UP, a leaked private group chat bristling with crude and highly offensive remarks against women, LGBTQs, “lumad” and Muslims served as the latest illustration of the impunity set by previous incidents of fraternity-related violence. It came to be known as #Lonsileaks.

The controversial thread involved alleged rookies of Upsilon Sigma Phi, the oldest male-exclusive student organization in Asia, many of whose members often go on to become luminaries and influencers in politics and business.

Even as enraged netizens uncovered the identities of a number presumed to be involved in the group chat, holding them accountable remains difficult because of two things: the Data Privacy Act and the frat’s code of omerta (silence), explained UP vice chancellor for student affairs Jerwin Agpaoa.

“How do you get sufficient proof for a leak?” Agpaoa said. “They’re all based on suspicion. Of course, people were not born yesterday to think it was not really from Upsilon. But the law does not operate merely on strong hunches. It would require clear-cut evidence that that was indeed from Upsilon.”

Upsilon itself has denied accusations and promised to conduct an internal investigation. The frat did not respond to the Inquirer’s multiple requests for an interview for this report.

Agpaoa said Upsilon had dodged meetings with the UP administration to clarify not only the leaks but also an earlier incident of frat-related violence with its rival, Alpha Phi Beta.

“It’s part of the frat code to step out of the issue. It’s complex. Someone might be willing to speak out, but you know the politics within these fraternities … These are powerful people, so lives may be at stake,” Agpaoa mused.

“If they showed up in the hearings and meetings, then that would signify their cooperation,” he said.

The penalty for those found guilty is suspension or even expulsion. 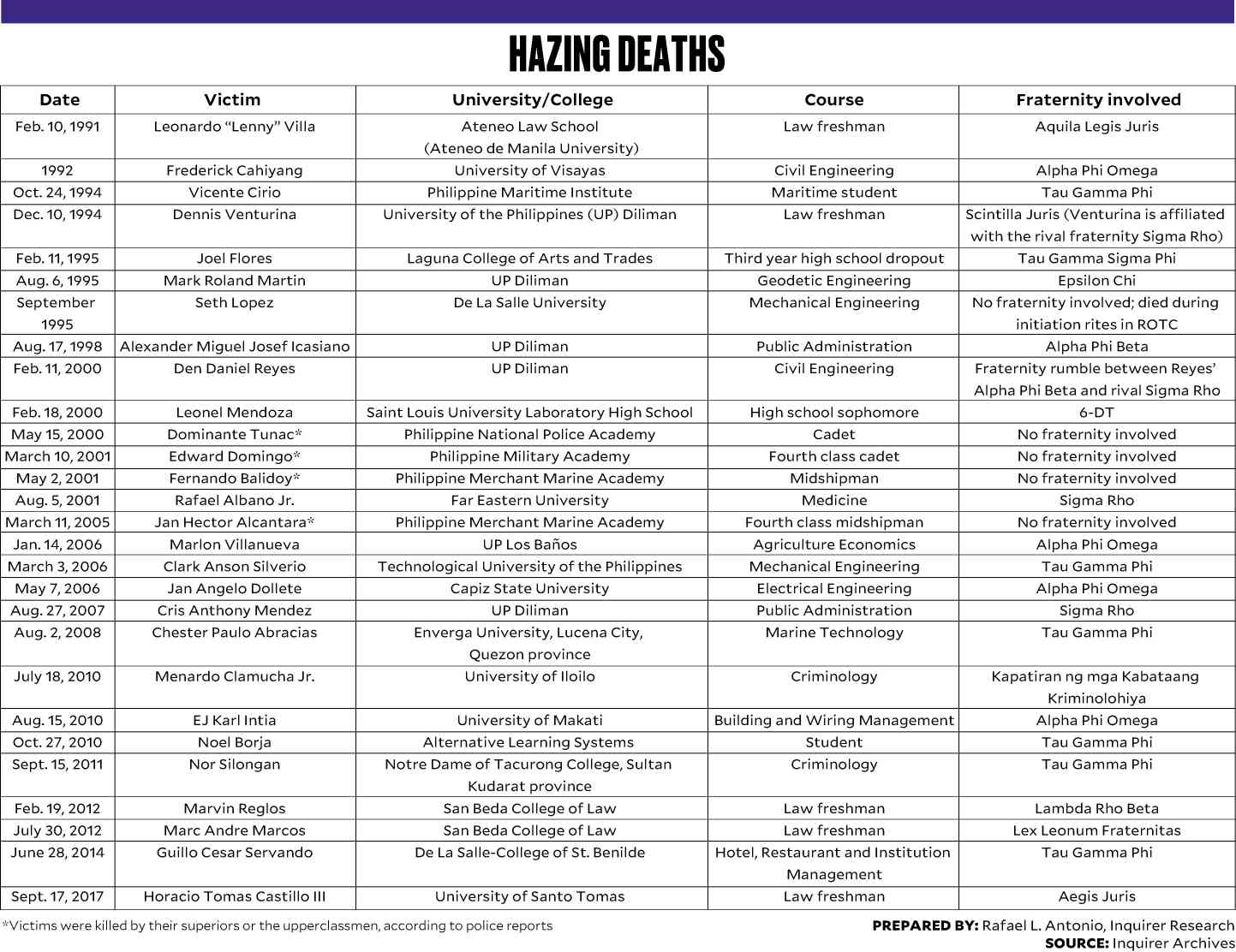 Agpaoa said UP was preparing to call a “clarificatory hearing” to which individual frat members would be summoned to establish their involvement.

But: “Unless someone will overwhelmingly tell us who said which, until then it’s all just speculation pa rin (still)… What we can do is more of a clarificatory hearing, fact-finding. You don’t have to have legally actionable issues. The act itself of fact-finding is less technical,” he said.

At least 30 hazing deaths have been recorded across the country since 1954, and lack of accountability is common to these cases.

Frat members are often shielded by, among other things, “their elite status, [coupled] with the protection of their senior brods and their code of silence,” said sociologist and UP lecturer Athena Presto.

“Fraternities aren’t really measured by their ability to affect society but by how they could help their members,” Presto said. “That’s how you get neophytes [like the 2017 frat men involved in the group chat] who know they have powerful brods who can help them get away with everything.”

Compare UP’s situation in this matter with how Ateneo resolved the bullying controversy in which a 14-year-old high school student was caught on video beating up his schoolmate in a campus toilet.

Ateneo’s policies against bullying are codified in its student handbook in accordance with Republic Act No. 10627, or the Anti-Bullying Act, said Ateneo president Fr. Jett Villarin in a statement.

As such, clear-cut institutional rules enabled the 14-year-old’s swift dismissal from Ateneo. Not as clear, however, was the way the public responded to the video that went viral on social media, which was met with hateful comments and threats against the boy.

“[The video showed] bullying, no euphemism around that,” said Cristina Montiel, an Ateneo professor and psychologist. “But it was also bullying, what happened on cyberspace. So many jumped on the student in a bullying way. It was like they feasted on the kid.”

So while punitive measures against bullying are already in place, Ateneo still needs to introduce policies that focus on prevention and empathy.

This means introducing protocols that allow both teachers and students to detect bullying, and involving parents to become role models to their children, Montiel added.

The same goes for UP, Agpaoa said. “We are pushing for a new rule that would allow us to subsume all organizations independently of their desire to be recognized in the university as long as they are organized on campus, here on our grounds. But of course you can still be dealt with as an individual student. The sanctions are even heavier.”

Meanwhile, the University Student Council is also in the process of crafting a moratorium under the Brotherhood Project, where fraternities that get involved in rumbles or participate in violence would be blacklisted from UP.

“The goal, ultimately, is to prevent it from happening again,” council chair Kisha Beringuela said.

In one of the more inflammatory parts of the leaked group chat, one message read: “We’re Upsilonians. We go wherever we please, including the insides of women.”

“We haven’t forgotten this yet,” Presto declared. Then she made a fearless forecast: “No frat man will dare run for the University Student Council for the next three years.”