Dam with mine waste collapses in Brazil; 7 dead, 200 missing 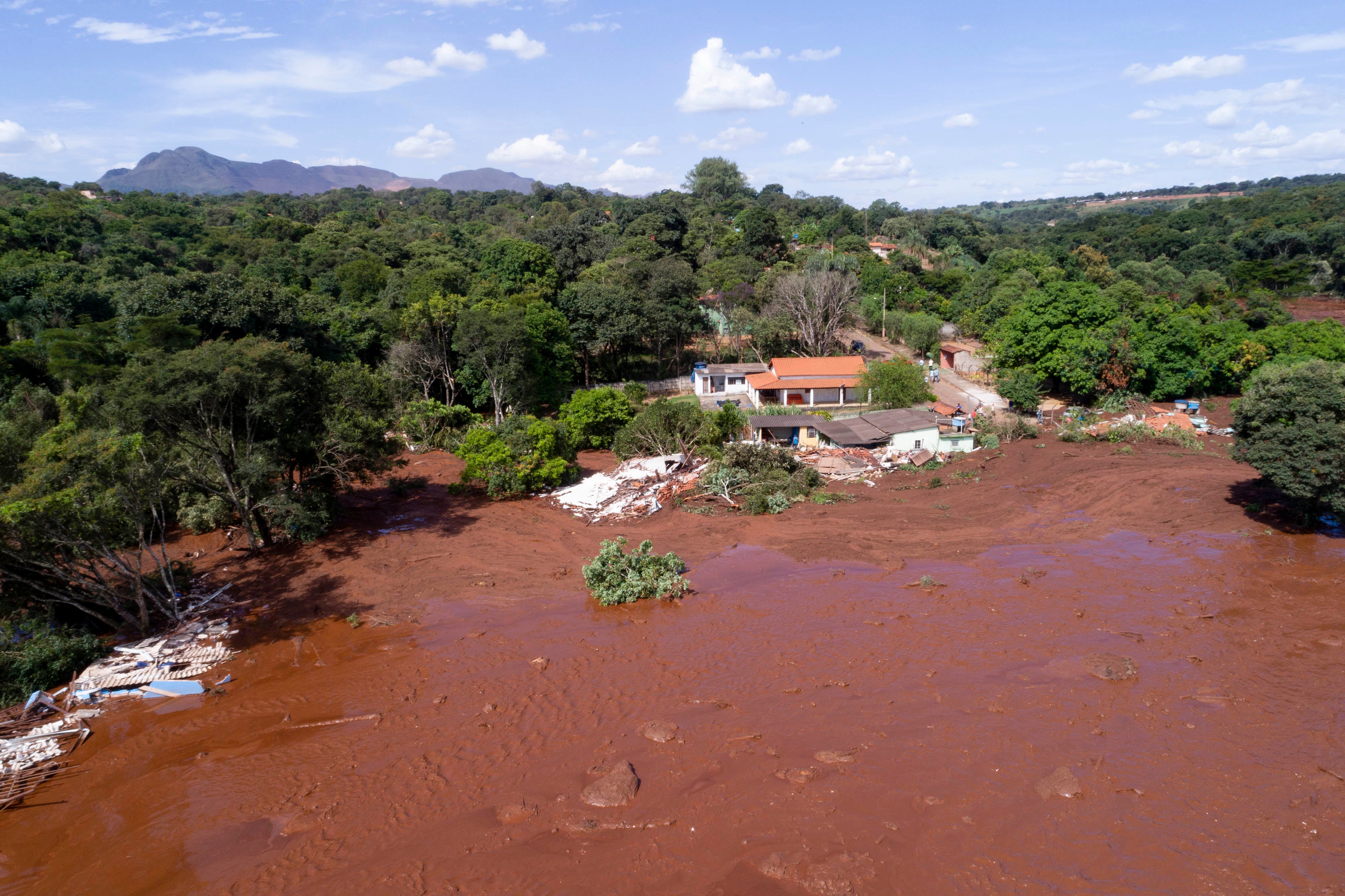 An aerial view shows flooding triggered by a collapsed dam near Brumadinho, Brazil, Friday, Jan. 25, 2019. Brazilian mining company Vale SA said it didn’t yet have information on deaths or injuries at the dam but said that tailings have reached the community of Vila Ferteco. (Bruno Correia/Nitro via AP)

SAO PAULO — A dam that held back mining waste collapsed Friday in Brazil, inundating a nearby community in reddish-brown sludge, killing at least seven people and leaving scores of others missing.

Parts of the city of Brumadinho were evacuated, and firefighters rescued people by helicopter and ground vehicles. Local television channel TV Record showed a helicopter hovering inches off the ground as it pulled people covered in mud out of the waste.

Photos showed rooftops poking above an extensive field of the mud, which also cut off roads. The flow of waste reached the nearby community of Vila Ferteco and an administrative office for Brazilian mining company Vale SA, where employees were present.

Seven bodies had been recovered by late Friday, according to a statement from the governor’s office of Minas Gerais state.

Vale CEO Fabio Schartzman said he did not know what caused the collapse. About 300 employees were working when it happened. About 100 had been accounted for, and rescue efforts were under way to determine what had happened to the others.

“The principal victims were our own workers,” Schartzman told a news conference Friday evening. He said a restaurant was buried by the mud at lunchtime.

Another dam administered by Vale and Australian mining company BHP Billiton collapsed in 2015 in the city of Mariana in Minas Gerais state, resulting in 19 deaths and forcing hundreds from their homes.

Considered the worst environmental disaster in Brazilian history, it left 250,000 people without drinking water and killed thousands of fish. An estimated 60 million cubic meters of waste flooded rivers and eventually flowed into the Atlantic Ocean.

Schartzman said what happened Friday was “a human tragedy much larger than the tragedy of Mariana, but probably the environmental damage will be less.”

There were no official reports of deaths, but the state fire department told The Associated Press that about 200 people were missing. The company said it did not have any further information.

President Jair Bolsonaro said he lamented the accident and sent three cabinet ministers to the area.

“We will take all the possible steps to minimize the suffering of families and victims,” Bolsonaro said in a speech, which he posted on Twitter.

The far-right leader campaigned on promises to jumpstart Brazil’s economy, in part by deregulating mining and other industries.

Environmental groups and activists said the latest spill underscored a lack of regulation.

The latest spill “is a sad consequence of the lessons not learned by the Brazilian government and the mining companies responsible for the tragedy with Samarco dam, in Mariana, also controlled by Vale,” Greenpeace said in a statement.

The rivers of mining waste raised fears of widespread contamination.

According to Vale’s website, the mine waste, often called tailings, is composed mostly of sand and is non-toxic. However, a UN report found that the waste from the 2015 disaster “contained high levels of toxic heavy metals.”