Bullet is proud to be a Jalosjos | Inquirer News

Bullet is proud to be a Jalosjos 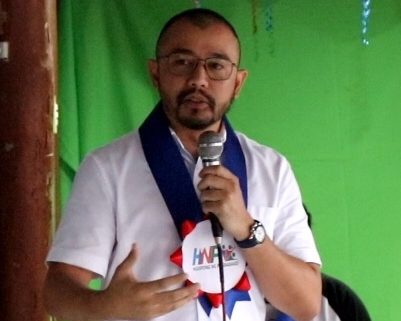 DAPITAN, ZAMBOANGA DEL NORTE—He wears many hats—that of a drummer, a rider, a sports enthusiast, a farmer, a businessman, a legislator, but most of all, a proud son to his father, former Zamboanga del Norte Rep. Romeo Jalosjos.

Seth Frederick “Bullet” Jalosjos now carries his father’s surname not with the negative social stigma attached to the conviction and jail time the old man served for statutory rape, but with love, admiration and pride.

But he and his family had to go through that painful episode in his father’s life which, he said, seemed like it just happened yesterday.

“At a very young age, I had to deal with the stigma of my family name. I was insecure. My schoolmates and even my friends said hurtful things to me about my father. I saw how friends of my dad and friends of our family abandoned and left us as if we had a communicable disease,” Bullet said.

He said it was a difficult phase but he had no choice but to face it head on by being strong and independent.

Bullet was 18 years old when his father was convicted and jailed at the New Bilibid Prison in Muntinlupa City in 1997 for raping an 11-year-old girl.

“We spent holidays and important family occasions in Muntinlupa. That experience taught me to be brave and to humble myself. I learned a lot of stories about prisoners there. They respected my father not because he was a congressman or he has money. He knows how to get along with people. He doesn’t care whether you are rich or poor,” Bullet said.

The elder Jalosjos was released in 2009 after his political ally, former President Gloria Macapagal-Arroyo, commuted his jail sentence. He only served 12 years in prison.

Bullet, now the representative of the 1st District of Zamboanga del Norte, said his political career was anchored on what happened to his dad and how he saw his father as a public servant and as a person.

“Those who truly know my father, they know that he has a passion for helping others. You can say what you want, but you can never undo his innate kindness and generosity. Especially after he sees the situation of many inmates. I saw a lot of good examples to live by from my father and one of those is to always have a helping hand,” Bullet said.

As legislator, Bullet formed Serbisyo Bilis, a mechanism by which his office can help those with immediate and urgent medical needs with a guarantee letter or GL from his office, scholarship grants and livelihood assistance to farmers and fishermen.

Charo Aurea, a cancer patient and a GL recipient from Bullet’s Serbisyo Bilis, told the Inquirer that she had to undergo chemotherapy for P126,000 per session at the East Avenue Medical Center.

She got a GL of payment from Serbisyo Bilis for 18 sessions of chemotherapy worth P2.268 million.

“The people deserve generosity, especially when you as a public servant was entrusted with that money to serve the people—fast. You don’t need to make them suffer—after all, that’s not your money—and even if you have to spend your own money, it’s a life you have to save, so you feel good,” Bullet said.

His decision to run for governor was guided by his father’s words, “When you serve the people, serve them with all of your heart, there is no such thing as half-hearted public service.”

When his father was still in jail, he asked his children who among them wanted to continue their family business and who wanted to join politics.

Bullet said he raised his hand and his father smiled and, in jest, asked everyone present, “Are there no other raised hands?”

The elder Jalosjos now spends most of his time at the family-owned Dakak Beach Resorts in Dapitan City, eating, drinking coffee, reading the newspapers, the Inquirer included, signing papers and greeting guests who dine.

Bullet said his father’s time in jail brought out the best in their family.

“We became closer, we learned the true value of family and my father even calls his time in jail as the best years of his life. If he wasn’t jailed, he said he might have died earlier and he might not have seen his grandchildren. It changed his perspective in life,” he said.