MANILA, Philippines – Various groups advancing child welfare and rights on Friday staged a protest outside the Senate complex to oppose efforts to lower the minimum age of criminal responsibility (MACR) in the country.

Led by Child Rights Network (CRN), groups like Save the Children Philippines (SCP), Salinlahi Alliance for Children’s Concerns (SACC), and Y-Peer Pilipinas gathered while senators tackle proposals to change the existing MACR at 15 years old to 12.

Y-Peer President Ralph Ivan Samson said lawmakers should instead focus their energy on putting additional funds to local government units (LGUs) for the creation and/or improvement of child-reform center Bahay Pag-asa than tinker on MACR. 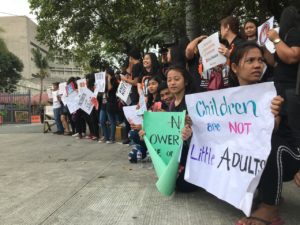 According to Samson, not all Bahay Pag-asa centers comply with international standards for child-reform centers as most of them lack equipment and facilities for child rehabilitation.

The group noted criminalizing minors do more harm than good as it “(does) not deter them from offending nor reduce their reoffending.”

It added that lowering MACR could also place “massive” demand on the nation’s justice and social welfare system that is “already struggling to properly implement the existing Juvenile Justice and Welfare Act (JJWA).”

“Addressing the needs of children in conflict with the law and those who are at risk requires a robust social welfare system to meet the required interventions and standard of care that children deserve no matter what they have done,” it also said.

SACC, for its part, called on the government to instead ensure “adequate, proper, and strengthened” implementation of JJWA.

“Responsive programs and policies to address poverty, including job generation, genuine land reform and access to free basic social services such as health and education, should be a top priority,” SACC said in a statement.

“For as long as children and their families are stuck in the quagmire of poverty, criminal acts, whether by adult or children, will continue to proliferate,” it added.

The Balay Rehabilitation Centers (BRC), an organization that practices psychosocial rehabilitation, said: “The victimization of children must be stopped. Justice demands that children be given a chance for a brighter future.”

On the other hand, groups comprising barangay officials and leaders also assembled outside the Senate compound, supporting congressional moves to lower MACR.

A supporter of lower MACR claimed 12-year-old children had become “plague” in society and streets, and that many children today were druggies that’s why incidents of holdup or snatching have become prevalent.

A barangay desk officer of the Children in Conflict with the Law (CICL), Tessie Cellona, also supports lowering MACR. She lamented that despite various efforts to rehabilitate CICL, they continue to commit crimes.

She also noted that children aged 12 years old are often used by criminal syndicates to carry out crimes.

Cellona argued the proposal to lower MACR does not necessarily mean children would be jailed.