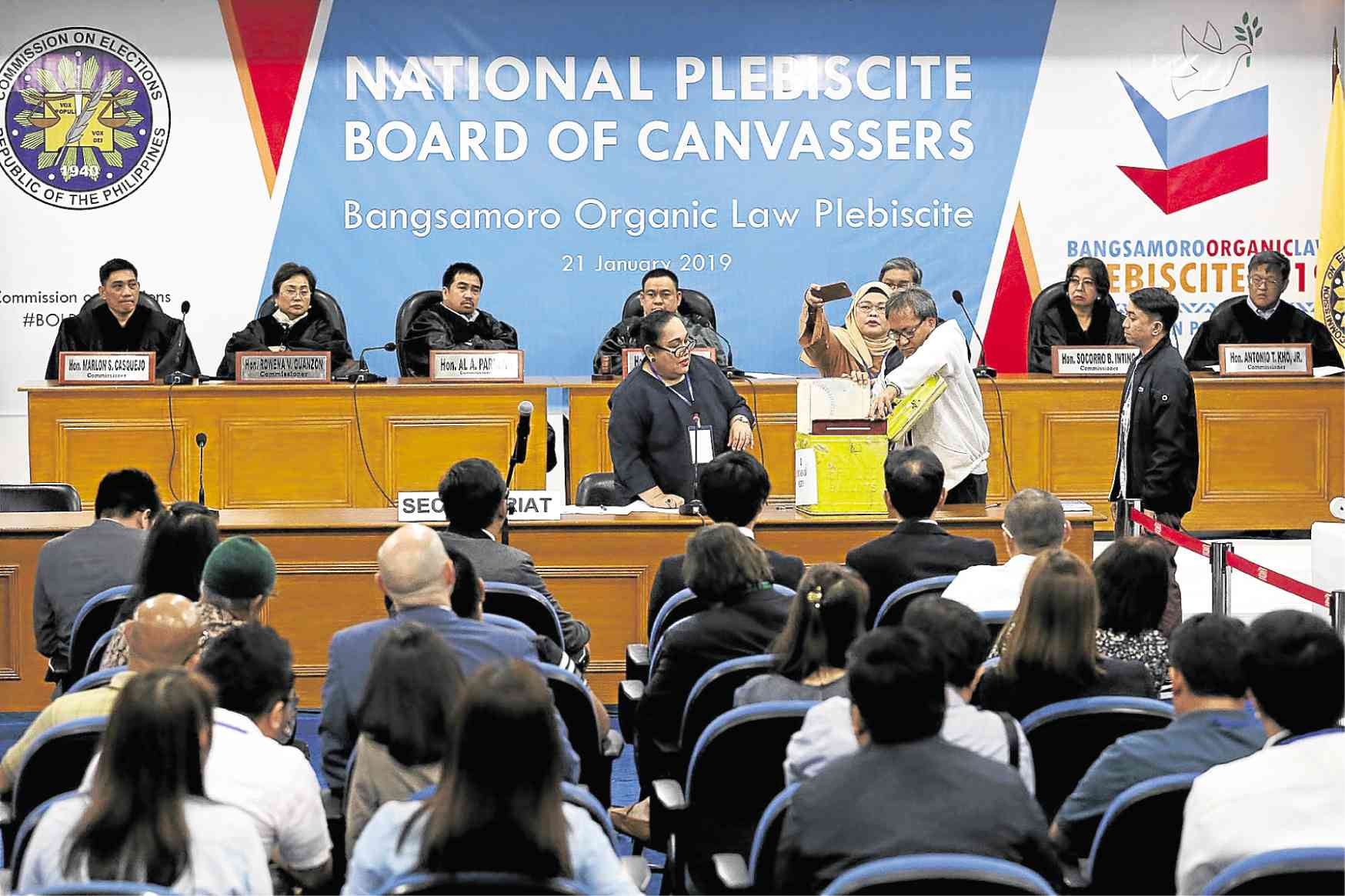 FIRST IN Canvassers on Thursday open a ballot box containing returns from Cotabato City, the first to be received by the Commission on Elections at its Manila headquarters. The returns will be tabulated to correct a “clerical error” that misstated the total number of voters in Cotabato City. —RICHARD A. REYES

COTABATO CITY – Claiming the results of Monday’s plebiscite here for the ratification of the Bangsamoro Organic Law (BOL) were not credible, Mayor Cynthia Guiani-Sayadi on Thursday said she wanted another vote, to be held simultaneously with the balloting in Lanao del Norte towns and villages in Cotabato on Feb. 6.

Sayadi said holding another plebiscite under heavy government security would erase doubts about the credibility of the vote.

There was no immediate comment from the Commission on Elections (Comelec).

Unofficial returns indicate that the BOL has won the plebiscite, the second phase of which involves balloting on Feb. 6 in Lanao del Norte (except Iligan City) and six towns in Cotabato that may want to become part of the proposed Bangsamoro Autonomous Region in Muslim Mindanao (BARMM).

In a talk with reporters, Sayadi expressed dissatisfaction with the final unofficial results of the plebiscite, which showed 36,682 residents voted to ratify the BOL and 24,994 rejected it.

The BOL would establish the BARMM, which would be an expansion of the current, poverty-wracked Autonomous Region in Muslim Mindanao (ARMM), the self-governing homeland of the Muslim minority on the war-torn island.

Cotabato City is not part of the ARMM, having voted twice to reject Muslim autonomy.

Sayadi had campaigned against the BOL to keep Cotabato City out of the BARMM, but the final unofficial results of Monday’s vote showed the residents chose autonomy this time.

Protest to be filed

Voters who cast ballots in the plebiscite numbered 61,676, or 55 percent of the city’s voting population of 113,751. The unofficial results showed the BOL won by 11,688 votes, displeasing Sayadi.

Abas is a nephew of Mohagher Iqbal, the MILF’s chief peace negotiator.

She said the vote-buying started even before the plebiscite and became rampant on the day of voting.

Sayadi said she had evidence and witnesses to support her claim. “It happened last Monday, it will happen again in the future,” she said.

Iqbal denied the allegations. “We have no capacity or funds to buy votes. There was no intimidation or harassment,” he said in a radio interview on Thursday.

She insisted that the results of the plebiscite did not reflect the “true will of the people.” If necessary, she said, she would contest the results in the Supreme Court.

The Comelec had planned to complete the canvassing of the votes four days after the plebiscite, but the slow arrival of returns at the election watchdog’s headquarters in Manila had led to the stretching of the count to a full week.

The poll body had already canvassed the votes from Cotabato City, but it had not yet corrected what the spokesperson for the agency, James Jimenez, called “clerical error” in the certificate of canvass that misstated the number of voters in the city as 39,027.

Misuari not a threat

The BOL lost the plebiscite in Sulu province, the bailiwick of Nur Misuari, leader of a faction of the Moro National Liberation Front that opposed the Bangsamoro law.

Malacañang said on Thursday that it accepted the outcome in Sulu.

But presidential spokesperson Salvador Panelo said the administration did not see Misuari as a threat.

Sulu is part of the ARMM but its rejection of the BOL counts for nothing because the region’s vote is counted as one and it is overwhelmingly for the Bangsamoro law. —WITH REPORTS FROM TINA G. SANTOS  AND JULIE M. AURELIO