MANILA, Philippines – ACT Teachers party-list Reps. Antonio Tinio and France Castro on Thursday said the move of another party-list group to bar members of the Alliance of Concerned Teachers  (ACT) from serving in the May elections is discriminatory and a violation of their rights.

Mohammad Omar Fajardo of Tao Muna party-list said his group will ask the Commission on Elections (Comelec) not to appoint public school teachers who are ACT members as part of the Board of Election Inspectors ‘to ensure fair and orderly conduct of elections.’ 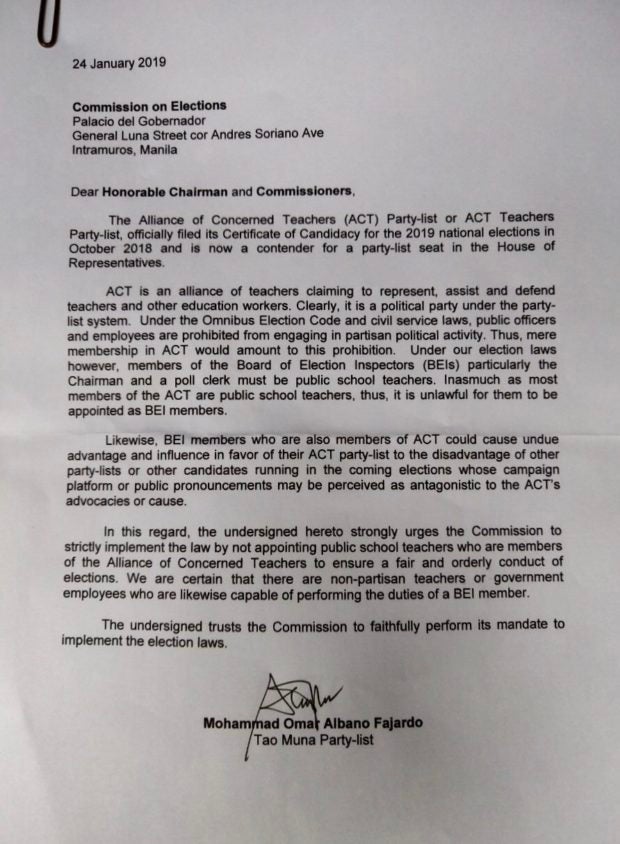 “First of all, this attempt to prohibit teachers who are members of ACT, a legitimate teachers’ union, from serving in elections is blatantly discriminatory and violates constitutionally protected rights, including freedom of association and the right to unionize,” Tinio said in a statement.

He added that teachers who are ACT members should not be prohibited from serving in the midterm elections.

The progressive lawmaker also explained that ACT and the ACT Teachers party-list are separate entities that are both duly organized and recognized under separate laws; the former as a public sector union and the latter as a sectoral party-list group.

Castro meanwhile argued that the move “ultimately aims to discriminate by mere affiliation to a legitimate teachers’ organization.”

“This group should be reminded that the Magna Carta for Public School Teachers states that teachers are given the freedom to organize,” Castro said.

“They should also be reminded that discrimination against teachers because of their affiliations are prohibited under the Magna Carta for Public School Teachers, laws on Public Sector Unionism and even in international laws,” she added. /gsg