Duterte: It’s OK if 12 is age of criminal responsibility 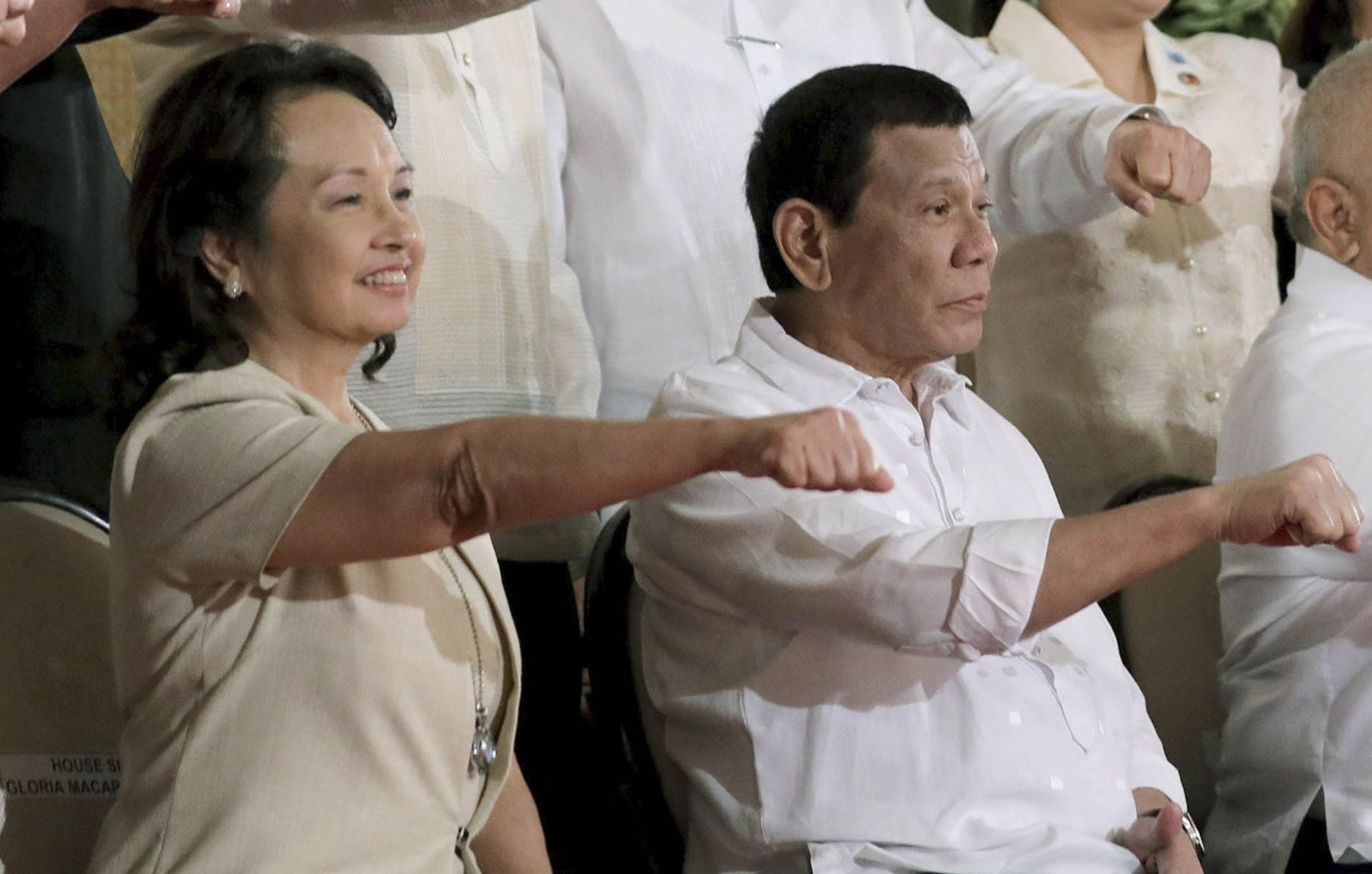 SPEAKER’S SUPPORT Saying the President’s agenda was also her agenda, Speaker Gloria Macapagal-Arroyo expressed her support for the House measure that would lower the minimum age of criminal responsibility. The House of Representatives passed the bill on
Wednesday but lowered the age from 15 to 12 years old. —INQUIRER PHOTO

President Rodrigo Duterte on Wednesday said lowering the age of criminal responsibility from 15 to 12 years old instead of 9 as earlier proposed by members of the House of Representatives was acceptable to him.

The much-derided 9 years old was backed by Speaker Gloria Macapagal-Arroyo, who admitted pushing for the controversial bill that would lower it to that age was meant to show her support for the President.

Speaking to reporters following a summit of tricycle operators and drivers in Pasay City after the House voted to pass on second reading the measure to lower the age of criminal responsibility to 12 instead of 9, the President said he was “comfortable” with the House bill.

He said 9 years was just his “suggestion” to legislators, adding that parents should be “conscious of the criminal accountability” of their children because they, too, would be held accountable for their children’s offenses.

“If it’s the final decision, I’m comfortable with it, as long as the indeterminate sentence cover above 12 years old and below 16 years old,” Mr. Duterte said, referring to the penal provision for child offenders.

When she was President of the country in 2006, Arroyo signed the Juvenile Justice and Welfare Act (JJWA) that set the minimum age of criminal responsibility at 15.

“From the beginning, I’ve said my agenda is the President’s agenda,” she told reporters earlier on Wednesday in explaining her support for the measure. “The President wants it.”

A day after opening the debates on the House bill, which its proponents said would stop criminal syndicates from using children and save the youth from a life of crime, the 291-member chamber on Wednesday approved the bill.

Human rights and child welfare groups condemned the lowering of that age to under 15, saying there was no evidence that a younger age had lowered the crime rate. This would expose children to further abuse while in overcrowded jails, they added.

During the debates, Buhay Rep. Jose “Lito” Atienza Jr. warned of social backlash once the chamber passed what he called “the worst bill ever produced in the House of Representatives.”

A House source told the Inquirer that Arroyo agreed to set the minimum age at 12 instead of 9 to ease the concerns of her allies, as public outrage mounted.

Minority Leader Danilo Suarez, a key Arroyo ally, also objected to the bill, noting that police statistics indicated a decline in crimes committed by children aged 15 and below.

“In other countries, they have shelters for juvenile delinquents. They have schooling; they have social orientation, rehab program. We have none. How can we even think of implementing this law?” Suarez said.

Arroyo said she was prepared to accept any decision on the proposal by the House and the Senate, where a similar bill is pending on committee.

“Whatever Congress will eventually come up with … let the legislative process determine that,” she said.

Presidential spokesperson Salvador Panelo said Malacañang was confident Congress would pass a law that protected children even if it lowered the age of criminal responsibility.

In a statement, Panelo said the President was committed to providing children “a safe and peaceful” environment by going after “the principals and main actors” of crime groups.

The President has blamed the JJWA authored by Sen. Francis Pangilinan for crimes being committed by minors because they cannot be jailed.

Opponents of the bill say the current law provides for rehabilitation of children in conflict with the law, but this is not being implemented properly.

The JJWA mandates at least one rehabilitation center for each of the 81 provinces and 33 highly urbanized cities, but there are only 63 in the country, and not all of them have adequate facilities and some have “subhuman” conditions, according to Juvenile Justice and Welfare Council Executive Director Tricia Oco.

Sen. Panfilo Lacson said building and maintaining the centers called Bahay Pag-asa would cost “tens or even hundreds of millions of pesos” that local governments could not afford.

He said in a radio interview that the national government should fund the centers instead.

Lacson said the Senate and the House could discuss the realignment of funds for Bahay Pag-asa centers during the Senate-House conference on the proposed P3.8-trillion national budget for 2019.