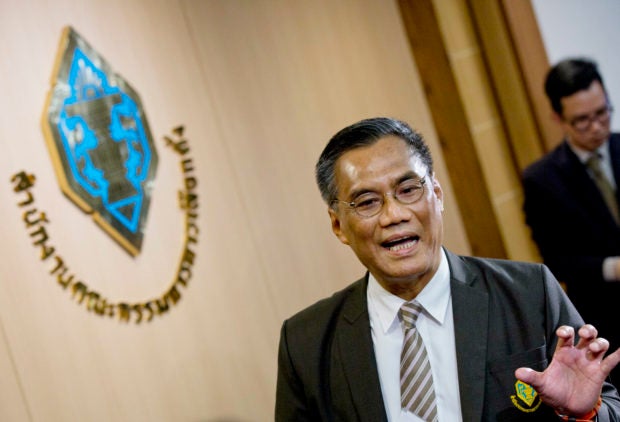 Chairman of the Election Commission Ithiporn Boonpakong talks to media following a press conference in Bangkok, Thailand, Wednesday, Jan. 23, 2019. Thailand’s Election Commission has announced that the nation’s first general election since the military seized power in a 2014 coup will be held on March 24. (AP Photo/Gemunu Amarasinghe)

BANGKOK  — Thailand’s Election Commission on Wednesday announced that the nation’s first general election since the military seized power in a 2014 coup will be held on March 24.

The decree published Wednesday in the Royal Gazette put into effect election laws that were drafted by the military government, which has kept tight control over political activities and made efforts to quash dissent during its time in power.

The ruling junta has repeatedly pushed back several promised election deadlines — at least once every year since their May 2014 coup overthrew the democratically elected government. This is the first time a poll date has been made official and is the most concrete step the country has taken toward a return to some form of civilian governance.

A statement issued Wednesday by the office of Prime Minister Prayuth Chan-ocha, the junta leader who staged the coup, said a new government “will be in place by the middle of this year.”

The most recent promised election date of Feb. 24 had to be abandoned because the decree giving the go-ahead was not issued as expected earlier this month, leaving not enough time to prepare for the polls. The government had announced earlier this month that coronation ceremonies for King Maha Vajiralongkorn would take place in early May, which had also fueled speculation that the poll date could be delayed.

Election Commission chief Ithiporn Boonpakong said the March 24 date was “flexible enough and should be beneficial to everyone concerned.”

Anti-junta protesters have staged sporadic demonstrations on Bangkok’s streets in recent months, demanding there be no further delays. They had voiced suspicion that the military government was postponing the polls to take further measures to strengthen its allied political parties.

The military has already overseen the drafting of a new constitution that will limit the power of future elected governments, shifting oversight to unelected bodies. Any new government will also be required to follow a 20-year “national strategy” drawn up by the military government.

Prayuth has hinted broadly that he may seek to be named the country’s leader after the polls. Several parties seen as serving as proxies for the military have been established, and Prayuth could run with one or he could become a so-called “outsider prime minister” under new rules that don’t require the premier to be a member of parliament.

Some parties already have announced their support for returning Prayuth to his office and for several months he has been active in making public appearances around the country in what resembles a political campaign.

The measures aimed at weakening politicians are seen as being directed at the Pheu Thai Party, which headed the government deposed in 2014. Pheu Thai, under various names changed for legal reasons, has won every national election since it was founded in 1998 by telecoms tycoon Thaksin Shinawatra.

Antagonism among the traditional Thai establishment toward Thaksin, who was accused of abuse of power, led to his being ousted as prime minister by a 2006 coup.  Since then, his supporters and opponents have waged a struggle for power, erupting several times into violence in the streets.

Thaksin and his sister, Yingluck Shinawatra, who was prime minister until shortly before the 2014 coup, are both in exile avoiding legal action against them that they claim amounts to political persecution. The Pheu Thai Party is still expected to do well, though the new election rules are expected to make it virtually impossible to win a majority and form a government without the support of an unelected senate largely selected by the military./gsg