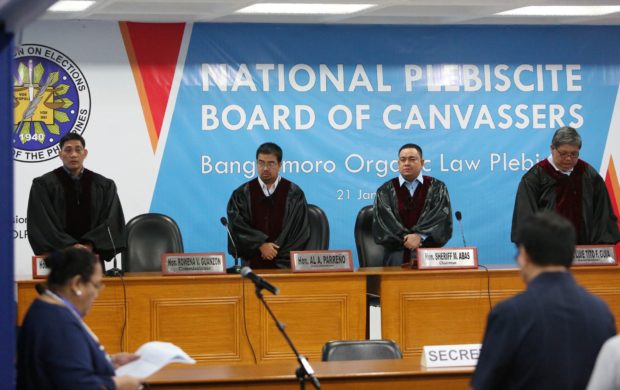 NOTHING TO CANVASS Serving as the National Plebiscite Board of Canvassers, the Commission on Elections led by Chair Sheriff Abas (third, from left) adjourns abruptly at noon on Tuesday as poll returns from Mindanao have yet to arrive in Manila. —MARIANNE BERMUDEZ

A law giving the nation’s Muslim minority greater control over Mindanao appeared to be headed toward ratification on Tuesday as a slow count of votes in a plebiscite to which it had been submitted for approval or rejection by the people of the region entered a second day.

The early results of Monday’s plebiscite for the ratification of the Bangsamoro Organic Law (BOL) also appeared to reflect the finding of a Social Weather Stations (SWS) poll taken in December last year that the majority of Muslims in Mindanao favored autonomy.

“The Bangsamoro people have [had] enough of war, terrorism and poverty. They hunger for peace and thirst for development in Mindanao,” presidential spokesperson Salvador Panelo told reporters in Malacañang, correlating the initial results of the plebiscite and the SWS poll findings.

“The initial unofficial tally of the votes in the plebiscite appears to validate the survey results,” Panelo said.

Taken from Dec. 16 to 19 last year, the poll found that 79 percent of Muslims favored the BOL.

But whatever the final result of the plebiscite, all Filipinos should accept it, Panelo said, adding: “That’s the law. Everyone has to toe the line.”

The national government will set aside an annual grant of P5 billion over the next 10 years to bolster development in the new autonomous region.

Monday’s plebiscite was held in the ARMM — composed of the provinces of Basilan, Lanao del Sur, Maguindanao, Sulu and Tawi-Tawi — and the cities of Cotabato and Isabela.

If the official count leads to the ratification of the law, a second vote will be held on Feb. 6 in Lanao del Norte province (except Iligan City) and six towns in Cotabato that may want to become part of the BARMM.

The ARMM and the cities of Isabela and Cotabato have a total voting population of 2.2 million.

Rey Sumalipao, Commission on Elections (Comelec) director in the ARMM, on Tuesday estimated the turnout at 85 percent.

‘Yes’ ahead in Cotabato City

Local officials in Cotabato City opposed the BOL, and votes against the BARMM charter were leading the slow hand count as of 1 p.m. on Tuesday.

But yes votes surged to take the lead by early in the evening.

In Isabela City, the military’s Western Mindanao Command released partial, unofficial results showing the BOL winning in most ARMM provinces with 1.3 million votes against 192,502 rejections as of 1:30 p.m. on Tuesday.

In Lanao del Sur, where returns from all 3,633 clustered polling stations had already been canvassed, the yes votes numbered 503,626 and the no votes, 9,816.

In Maguindanao, where returns from 38.4 percent of 3,919 clustered polling precincts had already been canvassed, the BOL was winning with 433,273 votes. It had been rejected by 15,990 voters.

The yes votes were leading in Basilan, counted at 123,694 against the no votes, 5,342, with returns from 80 percent of 1,162 clustered polling stations already canvassed.