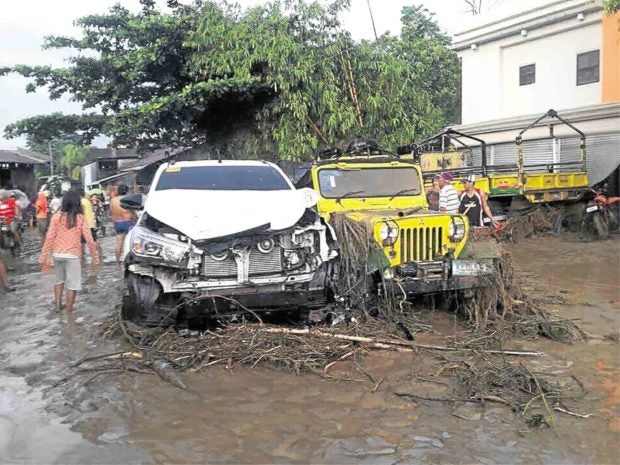 Although Tropical Depression “Amang” had weakened into a low pressure area on Tuesday, more than 5,000 families were taken to safer ground in 13 provinces, the National Disaster Risk Reduction and Management Council (NDRRMC) said.

Most of those affected by moderate to heavy rains brought by Amang were in the Caraga region.

Most of those affected were in Butuan City and Agusan del Norte, Dinagat Island, Surigao del Norte and Surigao del Sur.

Francisco identified the missing as Ariane Magbutang, 9, and Marilyn Maungat, 38. Two others, Adrian, 40, and Rhea, 5, both surnamed Magbutong, were hurt.

Tarragona and Caraga towns were affected by landslides while most areas in Manay were flooded after rivers overflowed, according to Karen Deloso, provincial information officer.

“The rain started at 11 p.m. on Monday and eased only around 4 a.m. on Tuesday. By 3 a.m. floodwaters reached rooftops of most houses,” said Pong Similatan, a resident of San Ignacio.

Francisco said four houses were destroyed in his village.

Landslides were reported in the villages of Dadong, Cabagayan, Tomoaong and Maganda in Tarragona, Santiago in Caraga town, and in Mayo, Mati City.

Classes in elementary and high schools were suspended in Caraga, Deloso said.

Gov. Nelson Dayanghirang ordered relief goods to be sent to the affected communities.

Officials said the heavy downpour may have been caused by thunderstorm and was not directly related to Amang. —Reports from Jeannette Andrade and Frinston Lim