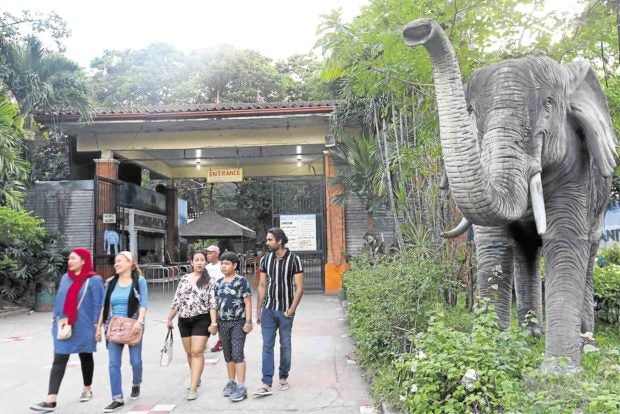 TEMPORARY CLOSURE Manila Zoo, home to Mali, an elephant who has lived there for over 40 years, is closing its doors to visitors for now. —EDWIN BACASMAS

Manila Mayor Joseph Estrada has ordered the indefinite closure of Manila Zoo starting today, weeks after the Department of Environment and Natural Resources (DENR) tagged it as one of Manila Bay’s major pollutants.

In a one-page memorandum issued on Jan. 21, Estrada ordered that “full support and cooperation be extended to the national government for the rehabilitation of Manila Bay.”

He said the temporary closure would allow the city government to conduct a proper assessment and study of the zoo in preparation for its rehabilitation.

The recommendation to shut down the popular attraction was made by the Office of the City Administrator and Department of Engineering and Public Works (DEPW).

Estrada also ordered the DEPW and Department of Public Service to submit a program of work for the construction or installation of water treatment facilities or sewage plants in the zoo and other city facilities.

On Sunday, the DENR will officially launch the P42-billion rehabilitation program for the major waterway.

The multiphase project will involve the massive cleanup of estuaries that feed into the bay, the relocation of over 220,000 informal settler families, including the possible closure of establishments found to be major pollutants.

Militant group Pambansang Lakas ng Kilusang Mamamalakaya ng Pilipinas, however, also urged the DENR to work on restoring the marine life in Manila Bay to benefit small fishermen, instead of just removing people who rely on it for their livelihood. —With a report from Jhessett O. Enano