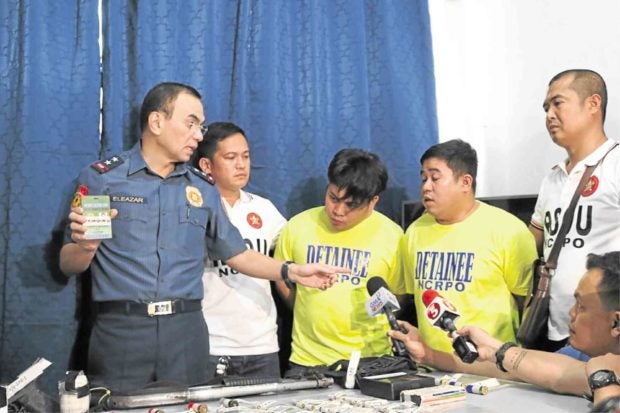 BUSTED National Capital Region Police Office chief, Director Guillermo Eleazar, presents to reporters Salah and Salman Mohamad. A third suspect is in the hospital for head injuries after he jumped out of a window. —PHOTO COURTESY OF NCRPO

Two members of a “highly influential” family believed to be involved in gunrunning and protecting those involved in the drug trade in Parañaque City were arrested when the National Capital Region Police Office (NCRPO) raided their house on Monday.

Armed with a search warrant, agents from the NCRPO’s Regional Special Operations Unit raided the house of the Mohamad family at 10 Ninoy Aquino Avenue in Barangay San Dionisio, Parañaque City, at 4:45 a.m. on Monday.

Arrested during the operation were siblings Salah and Salman Mohamad, the former supposedly a city hall employee. Their companion, Allan Acmad Burudi, was placed under hospital arrest after he sustained serious head injuries when he tried to escape by jumping out of a window on the second floor.

The siblings’ father, Salih Mohamad, who was not at home during the operation, remains at large.

In a press conference on Tuesday, NCRPO chief, Director Guillermo Eleazar, said the operation was based on a tip from a concerned citizen who asked not to be identified for fear of his life.

According to the tipster, the suspects’ family was “highly influential in the Muslim community in the area.”

Eleazar said that based on their surveillance operations, the suspects possessed unlicensed firearms and acted as bodyguards to those involved in the drug trade in Parañaque.

In 2017, Salih was one of the Muslim leaders who asked Mayor Edwin Olivarez for the creation of a Muslim Consultative Council in the city.

An identification card the police seized from Salah claimed he was a member of the Mayor’s Additional Support Group under the Office of the City Mayor.

Olivarez did not respond to calls and text messages asking for comment.

The Mohamad brothers were taken to the NCRPO headquarters at Camp Bagong Diwa in Taguig City following their arrest.

They face charges of illegal possession of firearms and explosives, as well as the violation of the election gun ban.

Eleazar said they had intensified their campaign on loose firearms to prevent these from being used in illegal activities in the upcoming elections.

Olivarez is gunning for his third and last term as mayor in the May polls. He is up against his predecessor, Florencio Bernabe Jr., who served for nine years.