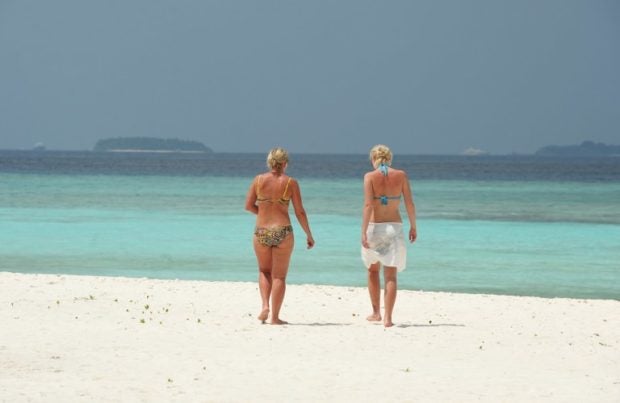 In this file photo taken on February 14, 2012, unidentified foreign tourists walk along a beach of the Paradise Island Resort and Spa in North Male Atoll. AFP

COLOMBO, Sri Lanka — Five tourists including a honeymooning couple have drowned in a single week in the Maldives, officials said, prompting a nationwide safety warning to holiday resorts in the pristine islands.

Tourism officials said all resort operators in the paradise archipelago were urged Monday to keep a close eye on their clients after the spate of deaths.

Strong currents caused by a north-east monsoon were blamed for the slew of drownings in the idyllic atoll nation, where such accidents are usually few and far between.

Around 1.4 million tourists visit the Maldives every year but the latest government data shows just 31 people drowned in 2017.

On January 13, two Filipino newlyweds were swept to their deaths by a powerful undertow.

The man got into trouble and his wife went to his aid, but both perished. Their bodies were recovered and repatriated to the Philippines, officials said.

READ: Filipino couple drowns while on honeymoon in the Maldives

An 84-year-old Czech tourist and a 66-year-old South Korean woman died within two days of each other at a resort near the capital Male while snorkelling.

A Russian woman on a dive trip was the latest casualty on Sunday.

A Pakistani holidaymaker came close to death but was plucked to safety and taken to hospital.

The tourism ministry was in the process of identifying safe zones for ocean swimming and diving after the spike in drownings, officials said.

The Maldives relies on tourism and visitors come for the turquoise waters and white sand beaches of the islands scattered some 800 kilometres (500 miles) across the equator. /ee