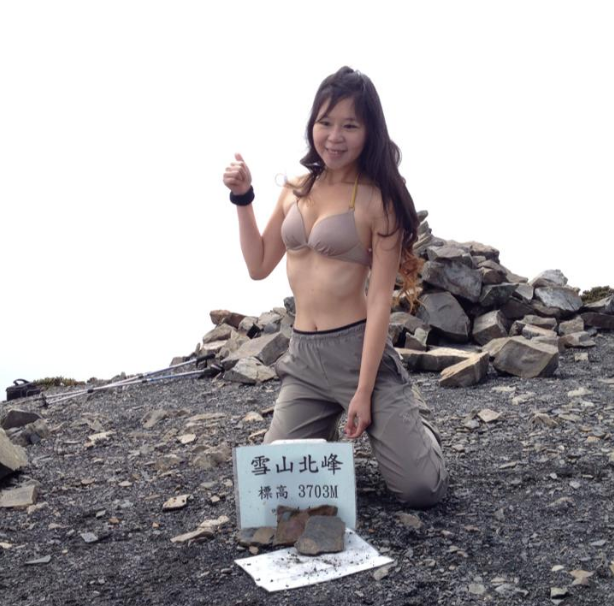 Taiwanese rescue teams on Tuesday were trying to retrieve the body of a dead hiker who became famous on social media for taking selfies on top of mountain peaks dressed in a bikini.

Gigi Wu — dubbed the “Bikini Climber” by fans — used a satellite phone on Saturday to tell friends she had fallen down a ravine in Taiwan’s Yushan National pPark and badly injured herself.

Rescue helicopters struggled to reach her because of bad weather and officials eventually located her lifeless body on Monday.

“The weather conditions in the mountains are not good, we have asked our rescuers to move the body to a more open space and after the weather clears we will make a request for a helicopter to bring the body down,” Lin Cheng-yi, from the Nantou County Fire and Rescue Services, told reporters.

Officials said Wu had told friends she was unable to move the lower half of her body after a fall of some 20-30 meters (65-100 feet) but was able to give her coordinates.

She is the latest in a string of social media adventure seekers who have met an untimely end.

Last week, the bodies of an Indian couple were found at the bottom of a popular overlook in California’s Yosemite National Park after hikers alerted officials to their camera equipment at the top of the cliff.

New Taipei City native Wu, 36, built up a sizeable social media following through photos of herself at the top of mountains dressed in bikinis.

She usually wore hiking clothes to scale the mountains, only changing into a bikini once she reached the top.

In an interview with local channel FTV last year, she said she had scaled more than 100 peaks in four years.

“I put on a bikini in each one of the 100 mountains. I only have around 97 bikinis so I accidentally repeated some,” she said.

When asked why she did it, she replied: “It just looks so beautiful, what’s not to like?”

While Taiwan is a largely tropical country, it boasts a spine of towering peaks down its middle that regularly top 3,000 meters. In the winter, temperatures routinely drop well below freezing on the mountain slopes.

Lin said their top rescue team hiked for 28 hours to reach the body, only sleeping for three hours because they knew temperatures were rapidly plunging. MKH