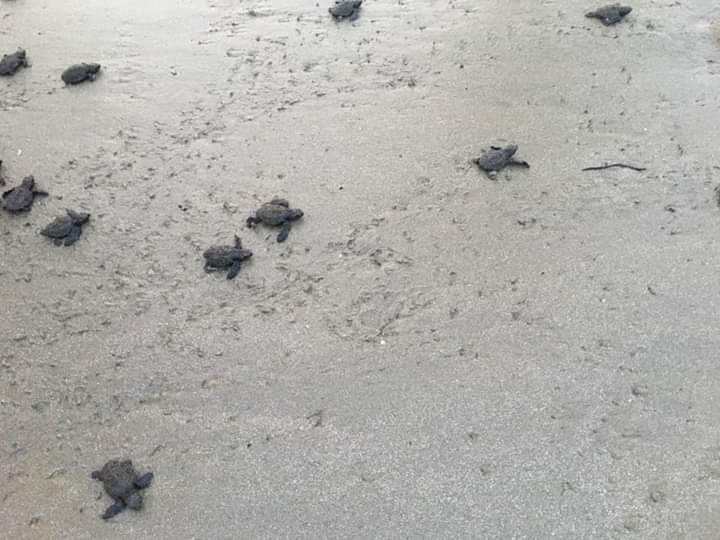 Viki Eun, the owner of Elysia Beach Resort, said the turtles, released during low-tide around 6 a.m., were part of the 163 eggs that were nested in Barangay Pangpang.

The World Wildlife Fund told residents in the coastal village that the other eggs may hatch in the afternoon or during the evening of Tuesday, she said.

The protected species, named after the color of their shells, have a “vulnerable” status in the International Union for Conservation of Nature, but the DENR Administrative Order (DAO) 2004-15 lists it as “endangered.”

Eun said that on February 1 last year, 68 hatchlings were also released to the ocean from the same village.

In 2018, six adult olive ridley turtles were sighted throughout Bicol, while 43 hatchlings were also released from the shores of San Cirilo village in Pasacao, Camarines Sur.

According to the Conservation and Development Division-Protected Area Management and Biodiversity Conservation Section (CDD-PAMBCS) of the Department of Environment and Natural Resources, locals must leave it to the experts in the event of nesting area sightings.

“We need the expertise of the DENR, so my advice to locals when there are reports [of sightings] is to let the turtle lay its eggs and call the attention of the [department],” said Jennica Anne Mendoza, a biologist at the CDD-PAMBCS.

She said that in case the eggs needed to be moved, locals must report or ask the expertise of the provincial environment and natural resources officer.

“Since DAO classifies it as endangered, this means that it is close to being considered as critically endangered and it has a small population size,” Mendoza said./lzb