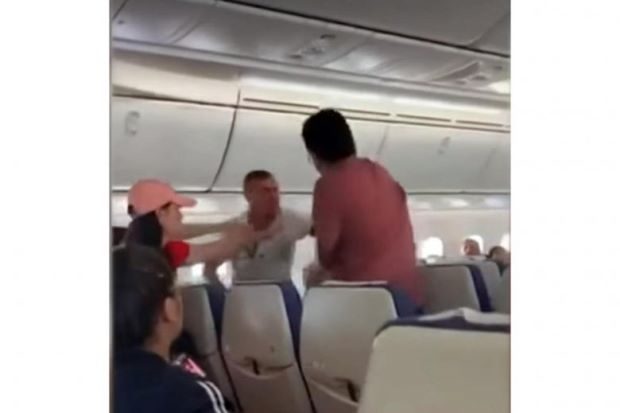 Scoot said that an Australian man on board punched another passenger, causing crew members and other passengers to step in to break up the fight. PHOTO: SCREENGRAB FROM FACEBOOK/7 NEWS via The Straits Times/Asia News Network

SINGAPORE — A Scoot flight from Gold Coast to Singapore was diverted to Sydney Airport on Monday (Jan. 21) due to a disruption caused by an unruly passenger on board.

Flight TR7 was scheduled to reach Singapore at 3:15 pm on Monday, but it was diverted just 1h 20 min into the eight-hour flight.

In a statement on Monday, Scoot said that an Australian man on board punched another passenger. Crew members and other passengers stepped in to break up the fight.

“The unruly passenger was eventually subdued with two restraining kits, with the help of five passengers,” the airline added.

A decision was made to divert the flight to Sydney, where the unruly passenger was handed over to local law enforcement.

According to Australian newspaper Brisbane Times, the man was met by Australian Federal Police and paramedics at Sydney Airport.

The assaulted passenger told crew members on board that he did not require medical attention.

Hello Steph. We regret your flight disruption. The flight was diverted to Sydney, as there was a disruptive passenger on board. The passenger was handed to local law enforcement for processing. We have arranged for alternative flights to affected passengers – The Scoot Team.

All affected passengers were transferred to alternative flights bound for Singapore – Scoot TR13, as well as Singapore Airlines flights SQ242 and SQ288.

“In Singapore, Scoot representatives will be meeting with arriving customers to assist them where necessary,” the airline said.

Scoot said that the passenger appeared normal during boarding and take-off, but began to disturb surrounding passengers after take-off.

Crew members were instructed not to sell alcohol to him, the airline said.

A passenger on the flight took a video of the scuffle and told Australian news agency 7 News that the unruly man had begun drinking heavily after the flight was delayed.

Flight tracking website FlightRadar24 showed that TR7, which was scheduled to depart Gold Coast at 9:20 am, took off at 12:09 pm.