A decadeslong push to halt the violence that has claimed more than 120,000 lives in Mindanao culminated on Monday with a vote on giving the nation’s Muslim minority greater control over the region.

Amid tight security, voters in the Autonomous Region in Muslim Mindanao (ARMM) — composed of Basilan, Lanao del Sur, Maguindanao, Sulu and Tawi-Tawi provinces — and the cities of Cotabato and Isabela went to the polls as early as 7 a.m. to decide whether to ratify the BOL and establish the BARMM.

A second vote is scheduled for Feb. 6 in Lanao del Norte province (except Iligan City) and six towns in Cotabato that may want to become part of the BARMM.

But if the BOL is defeated in Monday’s plebiscite, there is no reason to hold the Feb. 6 vote, James Jimenez, spokesperson for the Commission on Elections (Comelec), said on Sunday.

More than 20,000 police and soldiers were deployed to secure the vote.

The authorities confiscated 85 firearms and 12 grenades at checkpoints days before the plebiscite.

A grenade explosion in Maguindanao on Sunday night and the discovery of a grenade near a polling center in Cotabato City early on Monday caused tensions, but no untoward incidents marred the vote, and the Philippine National Police pronounced the plebiscite peaceful after the polls closed at 3 p.m. 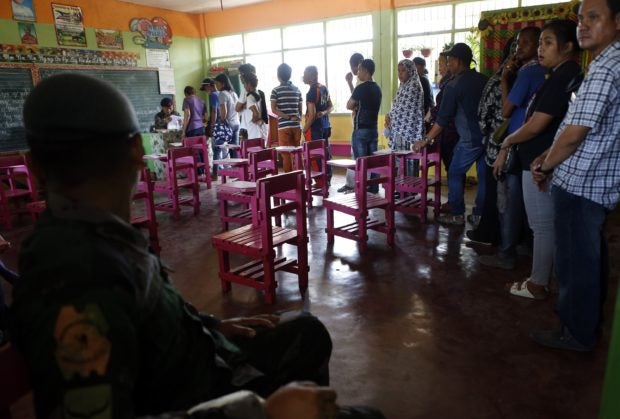 Policemen take over as Board of Election Inspectors at Sero Central Ementary School in Cotabato City Monday, January 21, 2019, as voters went to the polling centres to cast their votes to ratify a law that will give former Muslim rebels full autonomy in the new Bangsamoro homeland amid delays, intimidation, explosions, and harassment that marred the holding of historic electoral process in what locals claimed the solution to end the five decades of insurgency that have left more than 100,000 people dead. PHOTO BY JEOFFREY MAITEM

The Comelec expected about 2.2 million voters to have participated in the plebiscite.

The balloting was not computerized, with voters writing their answers to the questions of ratification of the BOL and inclusion in the BARMM by hand.

The count of the vote, which began right after the polls closed, was being done also by hand.

Jimenez said on Sunday that the results would be known in four days, with the announcement to be done in Manila.

The MILF’s 30,000 to 40,000 fighters would be demobilized and a parliamentary government would be elected to run the new autonomous Muslim region.

The BARMM would replace the ARMM and receive an annual grant of P5 billion over the next 10 years for development.

On Monday, as he voted in Simuay near the MILF’s main camp at Sultan Kudarat town in Maguindanao, Murad said he had never thought that the establishment of a broadly autonomous region for Muslims in Mindanao would happen, but with the conclusion of the peace deal with the government, “we [saw light at the end] of the tunnel.”

Maguindanao to carry the day

Maguindanao was expected to carry the day for the BOL, with its 650,000 registered voters—the highest in the ARMM.

Maguindanao Gov. Esmael Mangudadatu said he voted for ratification and predicted the BOL would win 95 percent of the votes in the province.

“I slept little because I had been calling our mayors and other leaders to convince their constituents to vote in favor of the ratification of the law,” Mangudadatu said.

Opposition to the BOL was heaviest in Cotabato City, where the local government led the campaign to defeat the BARMM charter.

Schoolteachers assigned to five polling centers in Cotabato City did not show up, but 72 police officers took over the polls as election inspectors.

The Comelec’s Jimenez said the schoolteachers did not report for poll duty after receiving threats on their cell phones.

The Comelec had predicted a turnout of 75 percent for the plebiscite, but no overall figure was immediately available after the polls closed on Monday.