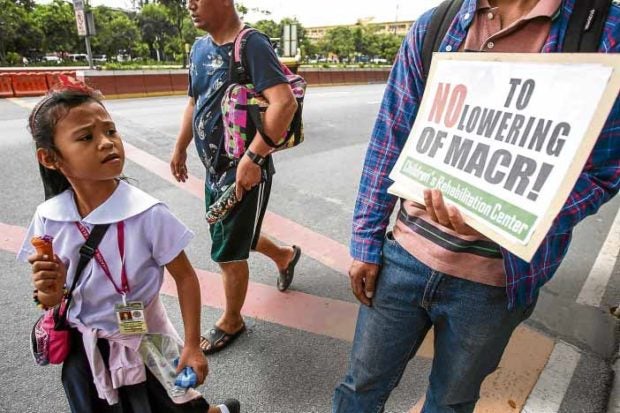 INNOCENT WITNESS A schoolgirl in Quezon City walks past one of the protesters against the House bill amending the country’s juvenile justice system by lowering the minimum age of criminal responsibility (MACR) from 15 years to 9. The measure was approved by the House committee on justice on Monday. —JAM STA. ROSA

The justice committee of the House of Representatives on Monday approved a bill that would lower the age of criminal responsibility from 15 to 9, against the objections of human rights advocates but with Malacañang’s approval.

Speaker Gloria Macapagal-Arroyo, who pushed for the measure “in support of a request from President Rodrigo Duterte,” called an executive session with the committee members ahead of the panel’s meeting.

By the time the public hearing started, only one dissenting voice had remained as the committee moved to send the substitute bill to the floor for consideration of the entire House.

There was no voting on the committee, as the chair heard no objections to Deputy Speaker Fredenil Castro’s motion to have the committee report approved.

Agusan del Norte Rep. Lawrence Fortun was the only committee member who registered a belated objection. Gabriela Rep. Arlene Brosas tried to object as well but her objection was not entertained as she was not a member of the panel.

In response to criticisms of the measure, Leachon said the bill was aimed at “protecting” children who were being exploited by criminal syndicates to evade prosecution.

He said the bill, once enacted into law, would not lead to the imprisonment of 9-year-olds, as some critics feared.

“There’s only mandatory confinement if the age of [the] child who committed the crime is between 9 [and] 15, and the crime he committed is serious, including murder, parricide, infanticide, [car theft] and violation of [the law against] illegal drugs,” Leachon said.

Children in conflict with the law would not actually be imprisoned but compelled to undergo rehabilitation and confinement in government-run youth care centers, he said.

On the other hand, heavy penalties would be imposed on people who would be found to have exploited children, with life imprisonment falling on those who had made children commit crimes punishable by at least six years in prison, he added.

Malacañang had pushed for the bill, but presidential spokesperson Salvador Panelo said he did not know what the President wanted to be set as the age of criminal responsibility.

The President has not hidden his disdain for the law authored by Sen. Francis Pangilinan that raised the age of criminal responsibility from 12 to 15.

Speaking to reporters, Panelo said the Pangilinan law was “being used by criminals to use the children.”

“So to my mind (the President) wants that amendment to protect the children,” Panelo said.

With the President himself making a pitch for the amendment, the Senate will also give priority to a bill that would lower the age of criminal responsibility.

Senate President Vicente Sotto III, however, balked at the House proposal to bring down the age of criminal responsibility to 9.

Sotto had introduced a bill that would lower the age of criminal responsibility to 13, although he said he would consider lowering it further to 11.

Pangilinan warned that targeting minors would allow criminal syndicates to go scot-free while the government looked like it was fighting crime.

The Philippine National Police said it was inclined to support the House measure.

But the Commission on Human Rights (CHR) said it strongly opposed the proposal.

“We stress the government’s obligation to protect our children, in line with the commitment we accepted when we signed the UN Convention on the Rights of the Child,” said Jacqueline Ann de Guia, spokesperson for the CHR.

“Children can commit crimes but lowering the age when they can [be] jailed [to] 9 will have pedophiles panting anxiously for the day they can call prison guards for takeout kids for sodomy. That is the only motivation for lowering the age of criminality to 9,” Locsin tweeted.

Retweeting an Inquirer story on Sotto’s statement that a majority of the senators would agree to lower the age of criminal responsibility, Locsin said the Philippines risked international condemnation.

“Does lowering criminal age to 9 go against the limits set by civilized states? If it does, world opinion will turn against us,” Locsin said.

Sen. Bam Aquino said on Monday that he doubted that the House proposal would clear the Senate.

“It shows how detached our legislators are [from] the lived realities of children who are in conflict with the law,” Hilbay said. —WITH REPORTS FROM CHRISTINE O. AVENDAÑO, LEILA B. SALAVERRIA, JAYMEE T. GAMIL, PATRICIA DENISE M. CHIU, DONA Z. PAZZIBUGAN, MATTHEW REYSIO-CRUZ AND MARLON RAMOS