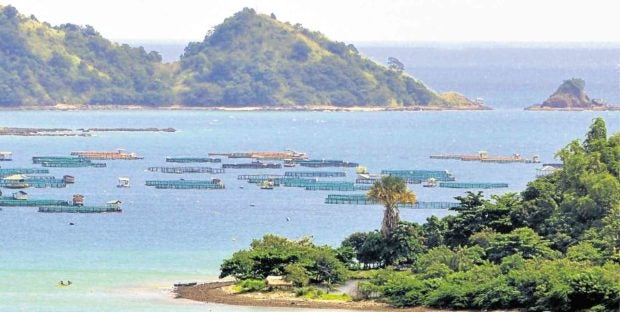 SUAL, Pangasinan — Fish farm pollution is forcing fishery and local officials to consider transferring fish cages to other areas to save the town’s aquaculture industry.

But if the operations continue without letting the sea rest in between stocking periods, the town’s aquaculture industry may suffer the same fate that befell fish farms in Anda and Bolinao towns that had been hit by massive fishkills, said Martin Allayban, senior aquaculturist of BFAR in Ilocos region.

The monthly water monitoring conducted here in December 2018 pictured a grim scenario, with the dissolved oxygen reaching critical level at Barangay Cabalitian; abnormally low level in the villages of Baquioen, Pangascasan and Techno-demo; and low level at Barangay Baybay Norte.

But the low dissolved oxygen could be attributed to low current because of neap tide during the monitoring period, fishery officer Logen Juan and biologist Jocelyn Marcial said in their report.

Neap tide is a natural occurrence during which water becomes almost stagnant, so decaying matters underneath the water are not properly flushed.

In three villages, the nitrite nitrogen level is already “lethal,” while in other areas, the level is still “desirable” for mariculture, Juan and Marcial said.

Lilibeth Signey, BFAR director in Ilocos region, said while Sual was a major bangus producer, there was a need to strictly enforce good aquaculture practices.

Sual has not experienced a massive fishkill, but fish pen operators lose some stocks because of some bad practices, Signey said. “We do not want the mariculture industry of Sual to suffer,” she added.

An interagency group proposed measures to counter aquatic pollution in the town, including zoning fishing and mariculture areas.

The group said the local government must also require operators to set up basic water quality monitoring equipment before granting them permits.

It recommended freeing Barangay Pangascasan of fish cages as the area was the most affected by pollution.

Mayor Roberto Arcinue said Barangay Baquioen and Cabalitian were being considered as alternative sites for the fish cages. Another area for mariculture is in Baybay Sur, a relatively untouched sea space that is suitable for bangus culture, he said. —Yolanda Sotelo

Read Next
Pangasinan schools stand up vs bullying
EDITORS' PICK
Cherry Mobile teams up with Cloud Panda PH, launches online store
WHO resumes hydroxychloroquine coronavirus trials
COOCAA TV Bounce Back Sale offers up to 50% off
DOLE eyeing P20-B subsidy for MSMEs
Over P785M distributed to 98K PUV drivers in Metro Manila — DSWD
SMDC The Good Guys on the Go
MOST READ
Philippines’ youngest survivor of COVID-19 dies
It’s final: Anti-Terror Bill now only needs Duterte’s signature
Piolo gets first call slip from ABS-CBN to resume ‘ASAP’ taping
‘She had no right to be in Singapore’: Youth pleads guilty to abusing Filipino maid
Don't miss out on the latest news and information.