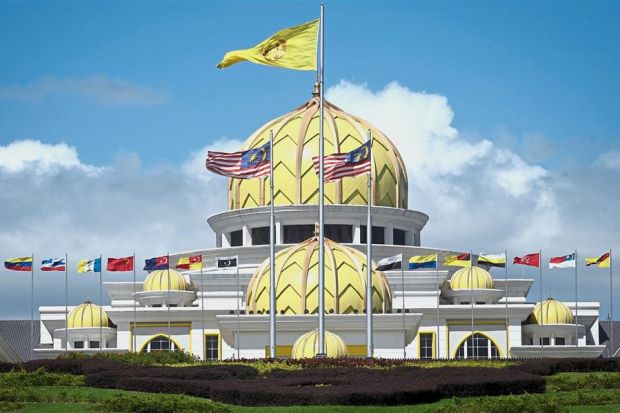 Royal residence: The exterior of Istana Negara in Kuala Lumpur, where the next Yang di-Pertuan Agong will reside after being sworn in. — Bernama/The Star Online

KUALA LUMPUR —This Thursday (Jan 24), Malaysia will witness the election of the Yang di-Pertuan Agong (King) for the 16th time, since it attained independence 61 years ago.

This election process is in line with Malaysia’s constitutional monarchy, where one of the nine Malay rulers or sultans will ascend the federal throne to become the Yang di-Pertuan Agong for a five-year term.

The office of the head of state fell vacant when Sultan Muhammad V, in an unprecedented move, stepped down as the Yang di-Pertuan Agong on Jan 6.

The Conference of Rulers came forth to handle the situation in a mature and harmonious manner, thus averting the development of any crisis.

Only the nine Malay rulers among the members of the Conference of Rulers will participate in the election process at a special meeting to be convened by the latter.

How is the election carried out? The first part of the Third Schedule of the Federal Constitution states that a ruler is qualified to be elected Yang di-Pertuan Agong, unless he is a minor or does not desire to be elected as King.

A ruler is also deemed as not qualified to exercise the functions of the Yang di-Pertuan Agong, if the Conference of Rulers resolves that he is unsuitable by reason of infirmity of mind or body or for any other reason.

Constitutional law expert Associate Prof Dr Shamrahayu A. Aziz said matters involving the election of the Yang di-Pertuan Agong and his deputy, or dismissing the King, was at the discretion of the Conference of Rulers.

On the election process, Section 2 of the Third Schedule of the Federal Constitution states that the Conference of Rulers has to offer the office of Yang di-Pertuan Agong to the ruler qualified for election and whose state is first on the election list. Bernama