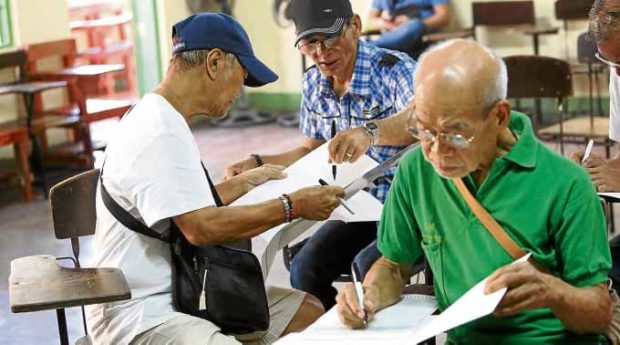 POLL REHEARSAL Elderly men participate in a mock election conducted by the Commission on Elections at Araullo High School in Manila on Saturday, ahead of the midterm elections this May. —MARIANNE BERMUDEZ

Several technical glitches marred the mock polls organized by the Commission on Elections (Comelec) on Saturday for the May 13 elections, according to poll watchdog group Kontra Daya.

The group also noticed military presence inside a voting precinct and low voter turnout, at least based on the one held at Toro Hills Elementary School in Quezon City.

“As early as 6:10 a.m., there was an error in the transmission diagnostics and it was not until the fourth attempt that the transmission became successful,” Kontra Daya said in a statement.

Later, it added, the voter registration verification machine had difficulty printing a receipt of a voter due to a Bluetooth connection problem between the machine and the printer.

“He had a long firearm and was apparently using his phone’s camera to take pictures. While he stayed for only about a minute and immediately left after taking pictures, it should be stressed that armed presence inside a polling precinct is a clear violation of election rules,” the group said.

“When representatives of Kontra Daya left the election precinct around 2 p.m., there were only 82 voters who participated in the mock polls, representing a measly 8 percent of the invited 1,000 voters,” it added.

The Comelec held mock elections in 60 clustered precincts around the country to test different components of the automated election system to be used in the midterm elections.

It stated earlier that it had expected several issues to come out during the mock polls.

“As far as being an evaluation tool is concerned, it is good to have a mock election,” Comelec spokesperson James Jimenez said.

Overall, the mock elections were successful, Jimenez said in a statement.

“Fifty-nine out of 60 implementation areas were able to transmit results within 30 minutes of the close of voting,” he said.

Jimenez also noted that the pilot test of the voter registration verification system and machine was similarly successful, “generating many insights that will be valuable as we move forward with this pilot test.”

Kontra Daya expressed hope that the transmission errors brought about by unstable internet connection and faulty Bluetooth pairing would be solved.

“It is also important for the Armed Forces of the Philippines and the Philippine National Police to respect election laws and order their armed personnel to stay away from polling precincts,” it added. —Tina G. Santos