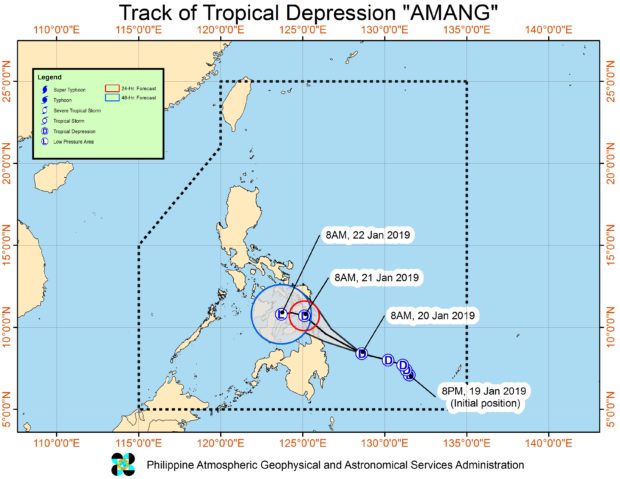 BUTUAN CITY – Authorities in Caraga started preemptive evacuation of some areas and suspended classes for Monday shortly after the entry of Tropical Depression Amang into the Philippine area of responsbility on Sunday.

With heavy rains expected, as Amang was expected to make landfall in the area, the Office of Civil Defense (OCD) and the Regional Disaster Risk Reduction Management Council (RDRRMC) in Caraga ordered pre-emptive evacuations in landslide and flood-prone communities.

“We have identified 234 barangays from the five provinces as both landslide and flood-prone areas that will be directly hit,” Mazo said. “We have ordered the different local government units across Caraga to take measures and order preemptive evacuations from low-lying, flood-prone communities, populated mountainous areas and those along coastal and river basin areas.”

“There is no room for complacency. We have to prepare twice or three times for any scenario,” she added.

She said the lessons from the past should not be taken lightly and should guide all the stakeholders in dealing with the storm.

As of 5 p.m., a total of 362 individuals had been evacuated in the region, according to Amado Posas, chief operations officer of OCD-Caraga.

“As of the moment we are waiting for reports from the different LGU’s as to the number of evacuees in their respective areas,” Posas said. “We have reports that the towns of Tago, Hinatuan in Surigao del Sur and San Jose in Dinagat have ordered evacuations.”

The OCD official also said minor landslides had been reported along the national highway from Butuan City to Sibagat town in Agusan del Sur and were already addressed by the Department of Public Works and Highways (DPWH).

Classes on Monday were called off in the following areas:

As of 6:00 p.m. on Sunday, the agricultural lands in the several villages in Las Nieves town in Agusan del Norte were already submerged due to continuous rainfall, according to the Agusan del NorteProvincial DRRMC.