LGUs in Eastern Visayas on alert due to ‘Amang’ 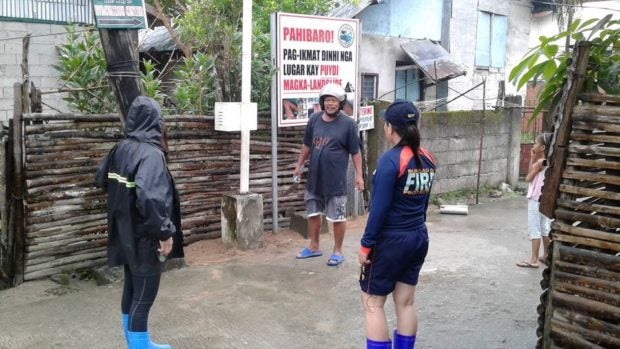 Members of the Disaster Risk Reduction Management Office in Barugo, Leyte conducted their monitoring in villages that are prone to flooding or landslides. Leyte was placed under signal number 1 due to tropical depression “Amang.” Barugo LGU

TACLOBAN CITY — Amid the threat of Tropical Depression “Amang” to Eastern Visayas, the Regional Disaster Risk Reduction Management Council (RDRRMC) issued an advisory to all local government units (LGUs) to be on alert for any possible flooding or landslide incident.

The RDRRMC, chaired by Office of Civil Defense Regional Director Henry Anthony Torres, urged all LGUs to activate their respective emergency operation centers; conduct pre-emptive evacuation of villagers located in areas identified as highly vulnerable to flooding and landslide; and advise fishermen not to venture to open seas.

Arvin Monge, provincial head of Leyte’s disaster risk reduction management office, said that they have been on standby and monitoring areas where possible flooding or landslide incident may happen.

In Tacloban City, its local rescue unit is also on ready for any eventuality due to Amang.

In Barugo town, Leyte, Mayor Ma. Rosario Avestruz, said that they are heeding the call of RDRRMC as she immediately deployed the town’s emergency team, to include the police and personnel from the Bureau of Fire, to visit barangays and alert the villagers for any possible rise of rain water or landslide.

“We have also propositioned food packs,” she said.

In Calbayog City, Samar, which still reeling from the devastation brought by tropical storm “Usman” last December, an alert has also been raised, especially in areas hit hard by Usman.

Rolando Saplad, assistant city disaster risk reduction management officer, said that the villagers of Cag-anahaw, considered the hardest hit area in the city due to Usman, were already advised to leave their homes and take temporary shelter at the nearby barangay of San Rufino.

The village was practically devastated with only a single house withstanding Usman.

About six people were killed while two remain missing in Calbayog City due to Usman.

In Maripipi, an island town in Biliran province, the municipal government is also on alert as it readied its evacuation centers and prepared food packs in case they would conduct preemptive evacuation, Ecole Gaviola, staff of Mayor Uldarico Macorol said. /je

ADVERTISEMENT
Read Next
Yuri Gagarin’s bust to be unveiled in Sri Lanka
EDITORS' PICK
Water remains our saving grace right now
Digital hunt for Hyun Bin: 5 challenges for Smartees
Motostrada expands by handing over ‘Trident’ and adding new ‘Horseman’ to its growing business
WHO: Indoor airborne spread of coronavirus possible
No arrests to be made on 1st day of allowed pillion riding for couples — HPG
House panel set to meet for possible decision on ABS-CBN franchise bid
MOST READ
‘I will always speak up for you’: Server on defending Fil-Am family from racist rant
‘Nouveau’: Agot Isidro hits Jinkee Pacquaio’s show of luxury Hermes, Louis Vuitton bikes
Bela Padilla on being tagged a Diehard Duterte Supporter: ‘Nope, not at all’
Solon withdraws support for ABS-CBN franchise renewal
Don't miss out on the latest news and information.