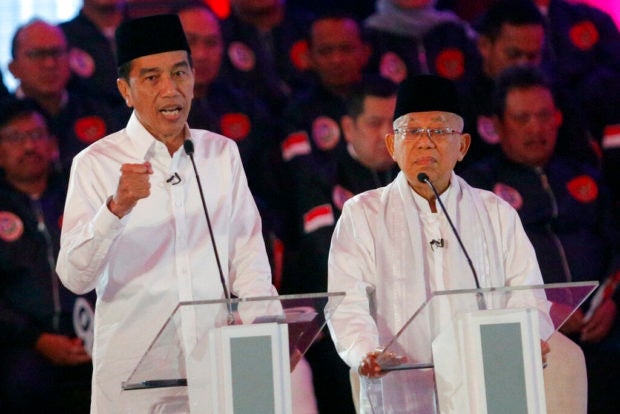 Indonesian President Joko Widodo, left, delivers a speech with running mate Ma’ruf Amin, right, during a televised debate in Jakarta, Indonesia, Thursday, Jan. 17, 2019. Indonesia is gearing up to hold its presidential election on April 17 that will pit in the incumbent against the former general.(AP Photo / Tatan Syuflana)

JAKARTA, Indonesia – Indonesian President Joko Widodo accused his election rival of allowing corrupt candidates on his legislative ticket and failing to include women in senior positions.

Widodo and former Gen. Prabowo Subianto, along with their running mates, faced off Thursday in the first of five debates before the April 17 election. The debate focused on terrorism, human rights, corruption, and law and order.

About 10 percent of voters are undecided and another 15 percent are considered swing voters, meaning the race has the potential to tighten.

Subianto, making his second bid for president after being narrowly defeated by Widodo in 2014, waffled when asked why his party has the highest number of candidates with corruption records.

“Maybe the corruption they did was not huge, maybe he or she just, what I mean is, the theft was indeed wrong, but the most important thing to be eradicated was a corrupter who stole trillions of rupiah (hundreds of millions of dollars) of state money, of people’s money,” he said.

Questioning Subianto’s opening statement of a commitment to empowering women, Widodo said he has nine women in important Cabinet positions but there are few the leadership of Subianto’s Gerindra party.

Subianto said his party has many female candidates and criticized the quality of decision-making by Widodo’s female ministers.

Widodo, the first Indonesian president from outside the country’s Jakarta elite, has made upgrading Indonesia’s infrastructure the signature policy of his five year-term.

In debating human rights, none of the candidates addressed Subianto’s involvement in human rights abuses during the dictator Suharto’s regime that ended two decades ago./gsg