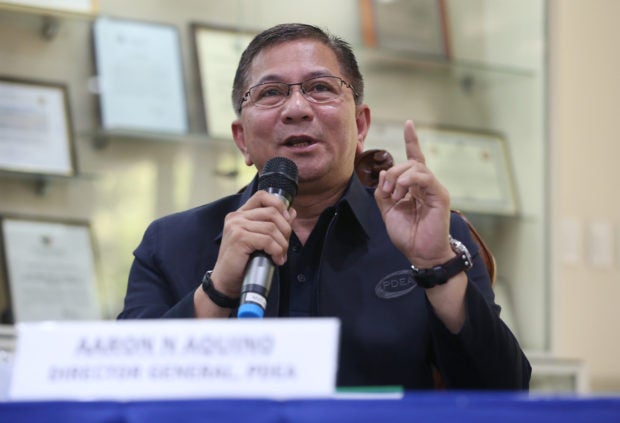 A viral Facebook post earlier claimed agents of the PDEA had mishandled the 12 rescued minors believed to be working for drug pushers in the area. Sixteen suspected drug personalities were arrested from the same operation on Wednesday.

One of the photos in the social media post showed the children walking in one line, with some placing their hands on the back of their heads.

In a press conference on Friday, a reporter confirmed to Aquino if the children were instead heading toward the vehicle of authorities after the operation, as mentioned by others present during the coverage.

“That’s right. Every picture says a thousand words,” Aquino said. “I don’t know why they are trying to bash the PDEA about this. We never paraded these children.”

Aquino, who was also present during the operation, maintained that his agents followed the procedures in rescuing minors believed to be involved in illegal drugs.

He said the children were neither handcuffed nor physically or verbally abused, and were even fed by agents of the PDEA after the operation.

(The problem is that even as we are already doing what’s right, some people with naughty thoughts want to destroy PDEA by twisting the story.)

As for Aquino, the children need rescue from the government, or else they will soon be perpetrators of the illegal drug trade in the country when they grow old.

“[If] in fact they are involved in illegal drugs, we need to rescue these children. These children are victims of the situation. We are not arresting them,” he said.

He also said he plans to launch a new program in the PDEA that will be named “Program Sagip Batang Solvent” to save kids being hooked on illegal drugs.

The 12 rescued minors will be the first to undergo the said program, Aquino said.

President Rodrigo Duterte, meanwhile, is poised to meet the children next week in Malacañang to “give them advice” and to hopefully speak with their parents.

Carreon said the children are now in the custody of Bahay Pag-asa in Navotas City. /jpv