Letters of George and Tim: A tale of compassion to lift kids out of poverty |

Letters of George and Tim: A tale of compassion to lift kids out of poverty

MANILA, Philippines — You might have heard of the Filipino boy who was sponsored by former United States President George H. W. Bush, but Timothy Villalba is only one of the millions of children this charity has helped throughout the decades.

In their office in Quezon City, INQUIRER.net interviewed the country director for Compassion International in the Philippines, Noel Pabiona, to delve deeper into the Christian charity that has helped foster a pen-pal relationship between such a powerful world leader and a humble child in Manila.

At the heart of charity

The said program, according to Pabiona, focuses on the spiritual, physical, socio-emotional, and social development of a child.

“Primarily number one (is) spiritual development of the child because we believe that life can be genuinely transformed only through Jesus Christ. And of course physical, socio-emotional, and social,” he explained.

“So all of those components are embedded in our program and perhaps what’s unique about Compassion International is that we work only with local churches working in the communities we have identified as worthy to be covered because of the poor socio-economic status,” he added.

One way of helping children under Compassion’s program is via sponsorship.

When a sponsor picks a child to support, Pabiona said, there would be a commitment to provide monthly sponsorship fee of $38 for the child’s education, among others.

George and Tim: A destiny

It was during a Christmas concert when then US President George H. W. Bush held a pamphlet from Compassion.

“Compassion actually promoted its ministry and they distributed child packets. In one of the child packets he got was a child packet of a boy from the Philippines,” Pabiona recalled.

“Now I believe at that time, people were interested because you know, he was the 41st president of the United States, like ‘Is he just getting that because people were looking at him?’ So people were surprised actually when he filled out the form and gave out his details and actually sponsored a child,” he narrated further.

When asked what he felt knowing that no less than a leader of a powerful nation was sponsoring a child under the program of Compassion in the Philippines, he said he had “great admiration” for the late president. Bush died on November 30, 2018, at the age of 94.

“Well, number one, you know I had great admiration for the man because he was really trying to engage with the young child [who he] was sponsoring in the Philippines,” Pabiona said.

“The young child has no idea how powerful and how famous this man was,” he added.

This was how Pabiona viewed the sponsorship of Bush to this kid from Quezon City.

“He (Tim) started in the program 1997, so he was barely five years old, he was actually four years, 10 months parang ganun, and his first sponsor was not George Bush,” he said.

“It was another man, and then apparently for some reason, the man terminated his sponsorship, no longer sponsored Tim, so he was available again…and that’s when George Bush picked him up,” he added.

Tim had sent letters — written in a mix of English and Tagalog, which will then be translated by one of the charity’s staff — three times a year to his sponsor, who was unknown to him throughout the aid.

Pabiona said he had found the exchange of letters between the child and Bush “amusing.” The letters would go through him first and then to Tim.

“It was also amusing for me kasi George Walker eh, of course, we all know that he is George Walker Bush, but of course the child had no idea at all that he was actually exchanging letters with one of the most powerful man at the time,” he said.

Today, the organization only has scanned copies of the letters that are stored in their system. The original letters are in the possession of Tim and Bush.

Pabiona, of course, had known who was sending the innocent child those letters that largely hinted of Bush’s identity.

“Nakakatuwa siya kasi sometimes the things that he (Bush) writes in the letter… of course,  matanda na ako so if I read it parang it’s almost a giveaway, ‘I attend these parties where very important people come and I meet leaders, my son works in a building that’s painted white’, mga ganon, so nakakatawa eh kasi he was really revealing much of himself to this little boy,” he added.

Catching up with Tim

Pabiona said that until now, both he and Tim still could not believe that Bush took time out of his busy life to sponsor and more so, write letters to a Filipino child from a small community.

Over dinner, during the holidays, the two looked back on the letters sent by the late US president.

“We had dinner and then nag-kwentuhan kami just updating each other about life… we were comparing notes, sabi ko, ‘Do you know that I was privileged to read the letters of George Bush to you?’. So I was recounting those letters and he (Tim) was very teary-eyed kasi sabi niya, ‘Grabe, I was too young to appreciate everything that he (Bush) wrote’, pero he remembers those things,” Pabiona narrated.

“And what Tim particularly remembers is how encouraging his (Bush) letters were to him. Particularly for a child living in poverty, that was big,” he added.

Bush had also sent Tim art supplies to encourage him in his craft. Today, Tim works with the government but the artist in him still thrives.

“He’s one of the committee officers and for him meron pa siyang mga unfulfilled dreams. Kasi si Tim is actually an artist, but he’s not an artist in the way we thought he was na drawing,” Pabiona said.

“He’s very gifted in music, so sabi niya nga na if only the president was still alive, he would gladly play for him, he plays the guitar very well,” he added. 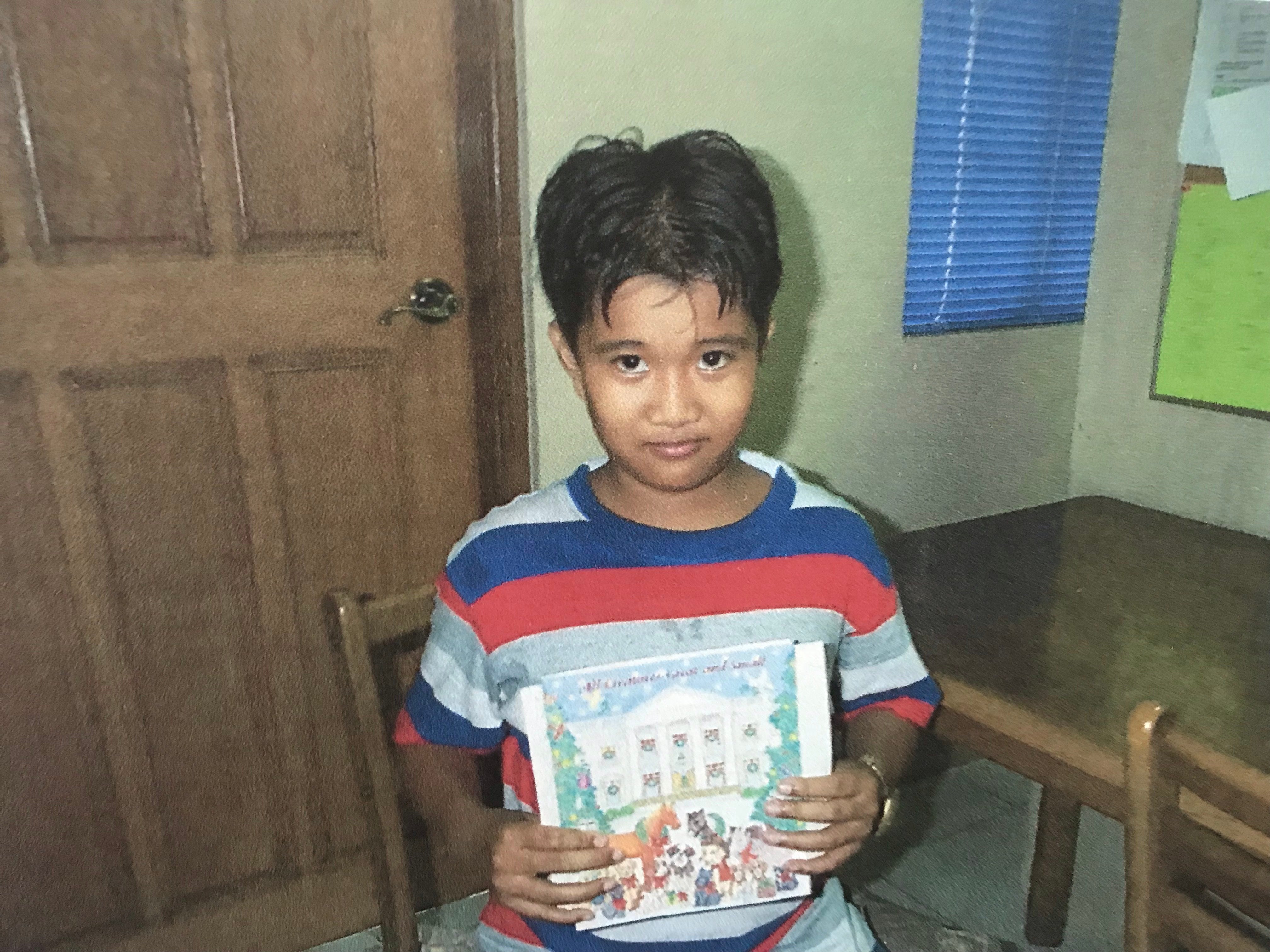 Aside from Bush, prominent figures have also sponsored a child through Compassion. Among them was American singer-songwriter Jordin Sparks, who supported a boy from Samar.

“We actually told the boy like ‘You know your sponsor is Jordin Sparks?’ But of course back then, sa Samar, so the boy didn’t have any idea what American Idol was… she (Sparks) was a sponsor prior to her winning,” he further said.

Other personalities who have given their support to kids via Compassion were a member of the K-pop girl group Brown Eyed Girls as well as Korean balladeer Bum Soo-kim, who currently sponsors a child living in a dumpsite in Paknaan, Cebu.

Pabiona believes a heart for children and not wealth necessarily enables prominent personalities to sponsor a child.

“We have an office in Korea, Compassion Korea, and the way they do their work, they were able to contact influential people who are able to gather all of these famous personalities,” Pabiona explained.

Compassion International Philippines currently has over 90,000 kids in their program.

The charity, according to Pabiona, has been operating in the Philippines since 1972 and helped thousands of children finish their education. Eventually, these graduates would set their sights on giving back to the organization that nurtured them.

“We have alumni who are abroad right now doing well and to know that they came from very poor families, they live in abject poverty is amazing,” Pabiona said.

“We have lawyers and doctors, in fact, one of the great things about graduates of compassion, while they’re in the program, when you interview them, one of the things that they will tell you is that, as soon as they graduate, they wanna payback.”

Behind the sponsorships, donations and letters, Compassion International is filled with people with a passion for bringing children out of poverty.

After the interview, Pabiona shared with INQUIRER.net how Compassion works in fostering a connection between beneficiaries and sponsors.

He showed where the letters, written by beneficiaries to their sponsors, would be scanned, processed and stored, and then sent to their respective patrons.

The letters, according to Pabiona, are one of two ways Compassion builds the connection between a child and their sponsor. The other one is through face-to-face visits, which sponsors themselves fund.  /kga