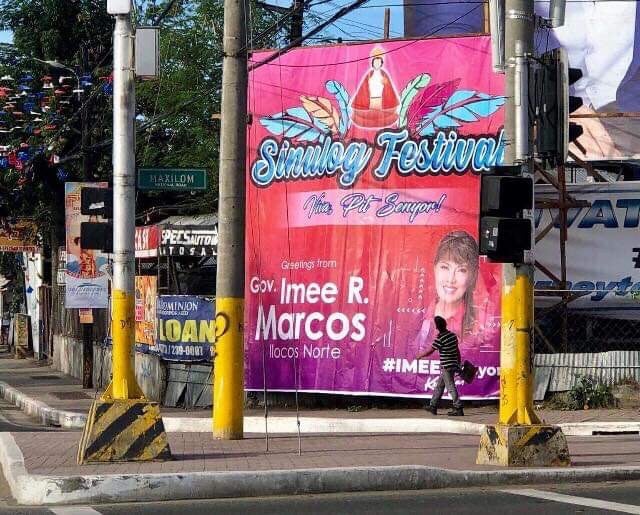 The huge outdoor ad, as shown in a photo posted on Facebook by Osmeña, had Marcos’ name and face with the words “Sinulog Festival” and “Viva, Pit Senyor.”

“Trust me when I tell you I am doing you a favor by taking this tarpaulin down,” Osmeña wrote.

“The Cebuanos do not appreciate the politicization of the Sinulog. This won’t be earning you any votes and is doing you more harm than good,” he added.

Gov. Marcos,Trust me when I tell you I am doing you a favor by taking this tarpaulin down. The Cebuanos do not…

Osmeña also said the move to take down Marcos’ billboard was “nothing personal,” even noting his own brother is also running for senator in the upcoming May elections but was not invited to the city’s celebrations.

Osmeña told INQUIRER.net he has ordered the removal of any political posters since January 10. He also said he directed the dismantling of all posters, including his own, along the Sinulog festival route on January 17.

In an earlier post, Osmeña pointed out that the Sinulog Festival is a religious event and not “a venue to campaign.”

“National candidates like anyone else are welcome to join in the celebration, but they will not be speaking nor will they be grandstanding on stage,” he wrote.

“The only star of the Sinulog is the Sto. Niño,” he also said.

The Sinulog is a religious event. It is not an excuse to get drunk in the streets, nor is it a venue to campaign….

Hours later, Osmeña posted a screengrab of a text message from Marcos.

“Dear Mayor Tommy, thank you for the reminder,” the text message read.

“I have asked our supporters to take the tarp down. Meanwhile, Viva pit señor! Imee,” it added.

The Cebu City mayor thanked the Ilocos Governor, saying it was not about politics but about the Sinulog.

“Credit where credit is due. This is not about politics. This is only about the Sinulog and how sacred it is to the Cebuanos,” Osmeña wrote in his post.

The election period for the 2019 midterm elections has officially started on January 13. However, the campaign period does not start until February 12. /kga