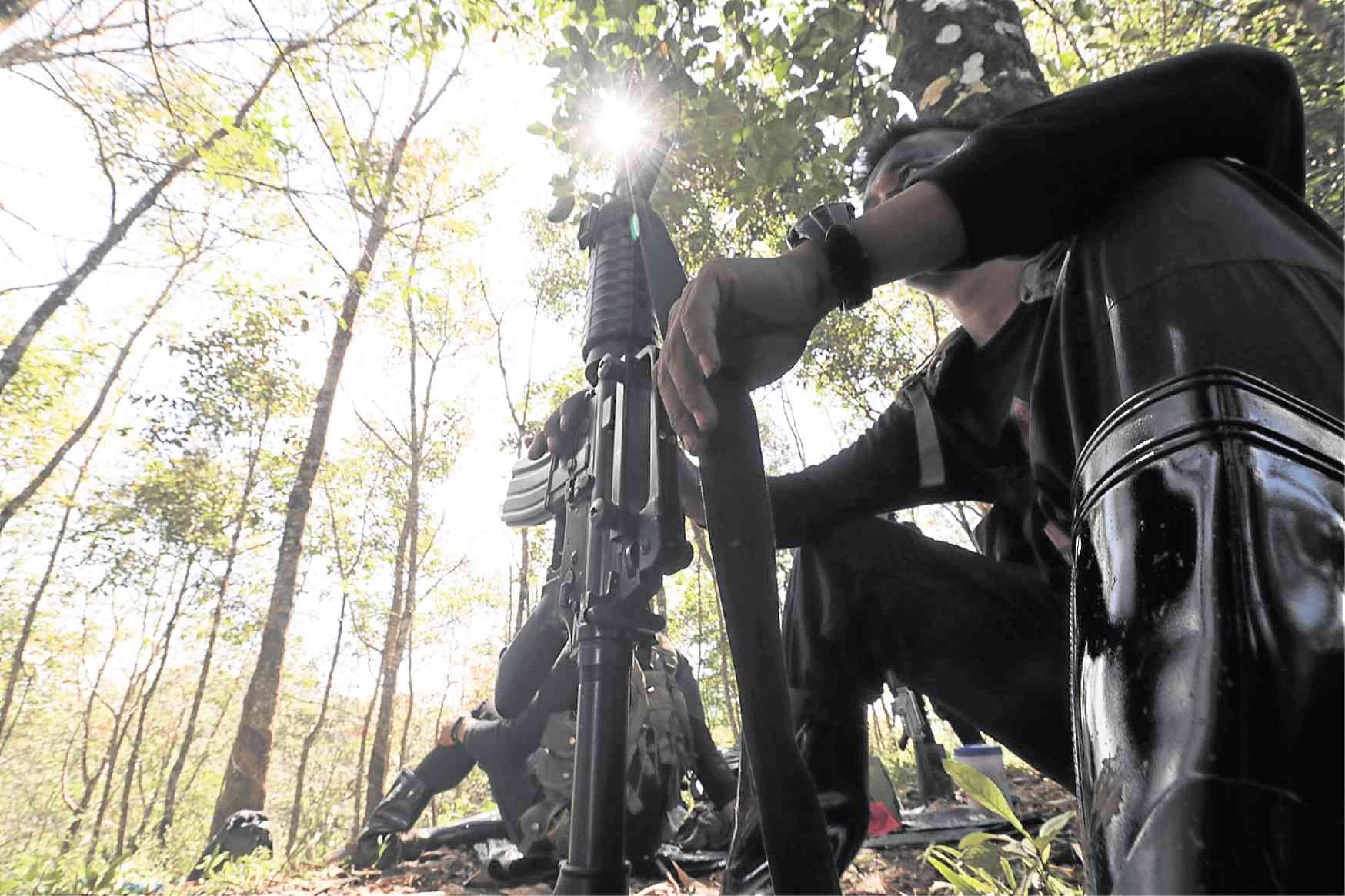 DIFFERENT REPUBLIC A rebel rests while securing an area somewhere in North Cotabato for the release of New People’s Army captives in December 2017. —BARRY OYAHLAN

DAVAO CITY—Communist rebels are now preparing to release at least 15 government soldiers taken captive as “prisoners of war” (POWs) by the New People’s Army (NPA) in northeastern Mindanao, according to a senior communist leader.

Maria Malaya, the spokesperson for the National Democratic Front of the Philippines-Northeastern Mindanao Region, said in a statement on Thursday that the NPA was waiting for a favorable timing for the release, including a temporary halt in fighting.

Malaya said the execution of the plan to release the captives, however, was being delayed by continued military operations and the “utter disregard” of government officials “for the welfare of their troops.”

One of the attacks was on a military detachment in the village of New Tubigon, Sibagat town, Agusan del Sur province, on Dec. 19, 2018.

Rebels also took 7,000 rounds of ammunition, a radio set and other equipment.

Another government militiaman was captured in an ambush in the town of Remedios T. Romualdez in Agusan del Norte on Nov. 29, 2018. The same attack reportedly resulted in the killing of a soldier and two militiamen.

Rebels seized four rifles during the Nov. 29 attack, according to Malaya.

She said the captured government soldiers were considered as prisoners of war and had been treated fairly by their captors.

“The POWs are currently under the custody of the appointed Custodial Forces of the NPA who are ensuring their safety, need and welfare,” Malaya said.

“Their human rights are guaranteed and they are being treated well as prisoners of war,” she added.

Malaya said the NPA and the People’s Democratic Republic apply provisions in previous agreements with the government and “international protocols of war.”

The military, however, condemned the “terror” act, saying the captured soldiers were held as hostages by communist guerrillas.

Malaya said the military had responded to the capture of government soldiers with a massive operation that stretched for 25 days in Agusan del Sur and Surigao del Sur.

“Since the last week of December 2018 until the present, AFP (Armed Forces of the Philippines) troops incurred several casualties from six counterattacks launched by the NPA,” she said.

Malaya said creating a safe condition could ensure the release of the captured government soldiers amid ongoing fighting between rebels and the military.

She urged families of the captured soldiers and militiamen to demand from President Duterte the facilitation of the release by ordering a suspension of military operations in the area.

During his tenure as mayor of Davao City, Mr. Duterte gained national prominence by helping facilitate the release of NPA captives in Mindanao.

“We also call upon the officials of Agusan del Sur and Agusan del Norte and the chairperson of the Regional Peace and Order Council to create conditions to ensure the safe and smooth release of the POWs,” Malaya said.

“We challenge politicians advocating genuine peace to help ensure this,” she added.