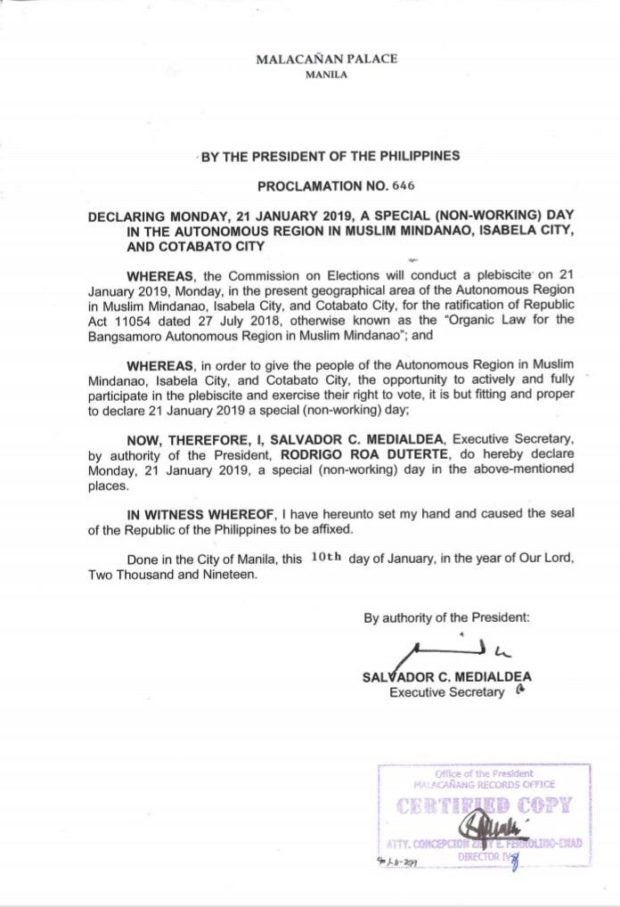 MANILA, Philippines — President Rodrigo Duterte has declared January 21 a non-working holiday in ARMM, Cotabato City and Isabela City in Basilan for the holding of a plebiscite to ratify the Bangsamoro Organic Law (BOL).

In his proclamation, the President ordered the declaration of a non-working holiday “to give the people of the Autonomous Region in Muslim Mindanao, Isabela City and Cotabato City, the opportunity to actively and fully participate in the plebiscite and exercise their right to vote.”

Duterte is expected to join a “peace assembly” on Friday in Cotabato City to support the BOL.

Once ratified, the BOL will pave the way for the replacement of the ARMM, which the President has said would bring lasting peace in war-torn Mindanao.

Presidential Spokesperson Salvador Panelo had earlier said Duterte is a “powerful influence” on the ratification of the BOL.

“The voice of the President is always a powerful influence on whatever matter he gives his voice into,” Panelo said in a Palace briefing. /jpv