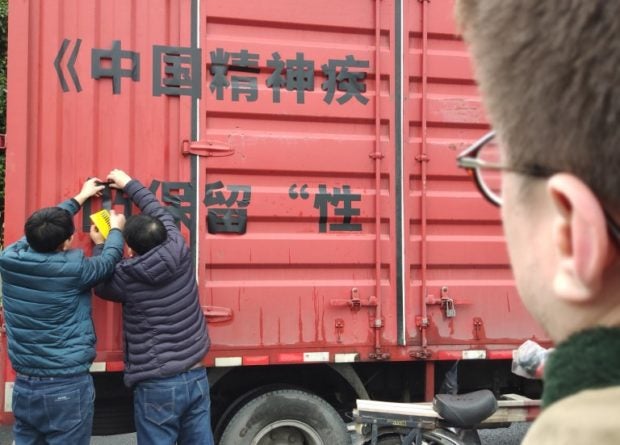 This photo taken on January 12, 2019 shows activists putting a slogan opposing “gay conversion therapy” on the side of a truck in Shanghai. – A Chinese artist and a gay policeman have launched an unusually high-profile public protest campaign in which bright-red trucks bearing slogans denouncing homosexual “conversion therapy” are being driven through several major cities. (Photo by STR / AFP) / China OUT

Artist Wu Qiong said the rolling protest was inspired by the 2017 film “Three Billboards Outside Ebbing, Missouri,” in which Frances McDormand gave an Oscar-winning performance as a woman who uses billboards to call attention to her daughter’s unsolved rape and murder.

“‘Three Billboards’ was about raising and questioning unresolved issues. We wanted to also use this format to raise doubts (about conversion therapy),” Wu, 28, told AFP.

Wu, who is based in the southern city of Shenzhen and says he is not gay, and his policeman associate — identified only by his surname, Lin — plan to stage the campaign in eight cities.

It began last weekend in Shanghai.

Some parents are known to pressure gay children to “correct” their orientation, including through conversion therapy.
The trucks bear slogans saying the therapy was being abused for a “non-existent disease.”

The method is widely considered bogus, and in 2017, a court in central China ordered a psychiatric hospital to compensate a gay man who was forced to undergo conversion therapy. But many Chinese clinics still offer it.

The first trucks toured around Shanghai last Saturday before the campaign moved to nearby Nanjing on Monday. An appearance in Beijing is planned later.

Separate vehicles are hired in each location due to restrictions on inter-city trucking.

Such campaigns are rare in China, where authorities quickly shut down most public protests to prevent them from snowballing.

But Wu said the project has encountered no obstructions yet. Its Chinese social media account remains unblocked by censors and had six million followers as of Wednesday.

Activists complain of a hardening government line amid a broader campaign to purge social media and entertainment content deemed “unwholesome.”

“The space for public opinion on LGBT-related topics in China is getting smaller and smaller. We want to… become a channel to connect with the public,” Wu said.

Wu said the project has raised about 20,000 yuan ($3,000) in donations. He hopes to raise triple that to pay for drivers and fuel.

“Our ultimate goal is for more people to talk about this,” said Wu.

“We stopped near a shopping mall (in Nanjing) and a security guard came out to ask what ‘sexual orientation disorder’ meant. After we explained it to him, he supported us.” /ee