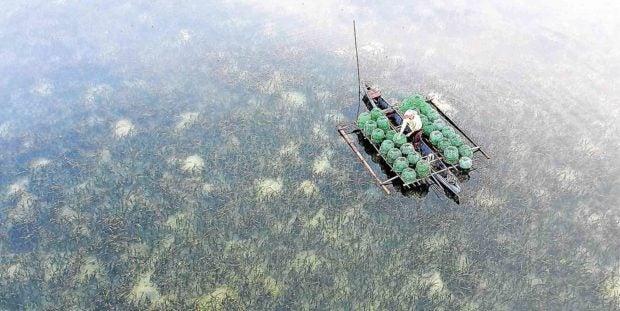 CRAB FISHING A fisherman checks his crab traps in a section of Lianga Bay in Barobo town, Surigao del Sur, as the Bureau of Fisheries and Aquatic Resources raises a red tide alert in the area. ERWIN MASCARIÑAS

CAGAYAN DE ORO CITY—The Bureau of Fisheries and Aquatic Resources (BFAR) has warned the public against harvesting and consuming shellfish from Lianga Bay in Surigao del Sur province after authorities confirmed the presence of red tide toxin in the area.

The BFAR, in its bulletin issued on Monday, said the warning covered all types of shellfish and small shrimp, commonly known as alamang.

It said these were not safe for human consumption, citing results of tests on water samples submitted to the regional fisheries laboratory in Butuan City and shellfish meat sent to the BFAR central office in Quezon City.

Leona Victoria Nortega, officer in charge of the regional fisheries laboratory in Caraga, said the BFAR had been monitoring the area and had been conducting water sampling weekly.

“The causative organism identified in the current red tide episode is Pyrodinium bahamense and it is around the waters of Barobo. But since the town is part of Lianga Bay, the warning has been issued to cover the entire area,” Nortega said.

She said the BFAR had asked residents in fishing communities to avoid selling, buying and eating shellfish harvested from the towns of Lianga and Barobo.

“Unfortunately even with the red tide warning in place last year in the area, we had reports of those who still insisted on selling and eating shellfish,” Nortega said.

“This should be a prime concern for local governments to [ensure compliance] before someone eats shellfish with a high concentration of toxins,” she added.

The BFAR said other towns sharing Lianga Bay’s waters, like parts of San Agustin and Tagbina, should also take caution.

“While the adjacent waters of Hinatuan Bay and Bislig Bay had been found negative for the toxins, we would still urge them to make proper queries whether the shellfish was not caught within the waters of Lianga Bay,” Nortega said.

“Let me make it clear that even if fish, squid, shrimps and crabs are safe to eat as long as they are properly cooked, these should be obtained fresh and washed thoroughly. Internal organs, such as gills and intestines, should be removed before cooking,” she said.

But she said people should avoid eating anything raw while the warning was in effect. —Erwin Macariñas