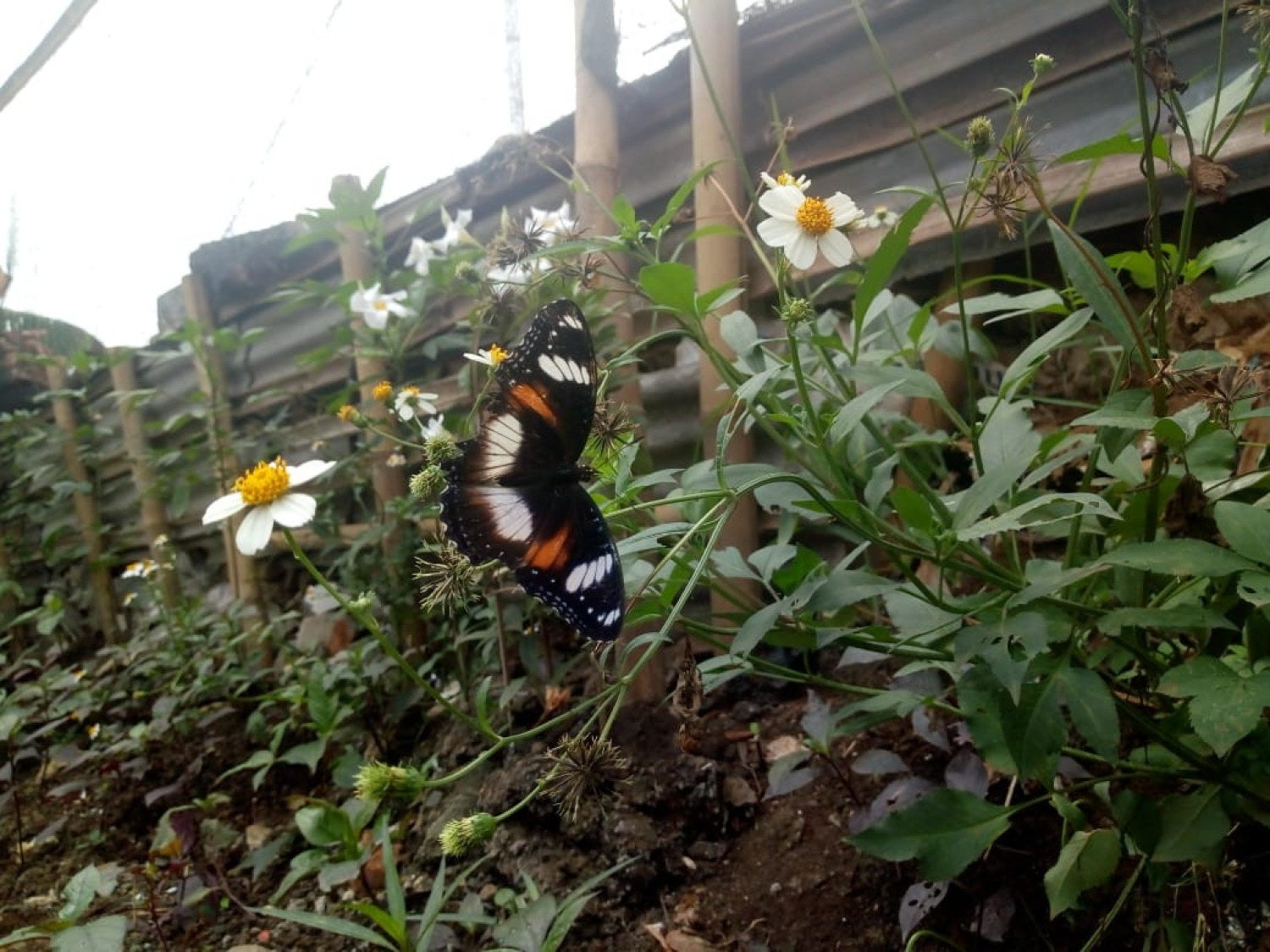 A butterfly perches on a flower stem at the Butterfly Garden in Cipinang Melayu, Makassar subdistrict, East Jakarta, on Monday. The 120-square-meter enclosure is a part of the Cipinang Melayu green open space. (JP/Sausan Atika)

JAKARTA — Under the scorching sun, a man in an orange uniform and armed with a butterfly net and a white plastic sack hunted butterflies flying around a grass field in East Jakarta on Monday.

After collecting a number of samples, he walked toward a 120-square-meter area caged off with a 5-m fence and shaded by black plastic netting, known locally as the butterfly garden, to release the collected insects.

The scene has become a regular event over the past months at the 5-hectare Cipinang Melayu green open space (RTH) located in Cipinang Melayu,  East Jakarta.

Taryono, 32, an employee of the Cipinang Melayu Public Facility Maintenance Agency (PPSU), also known as the “orange troops”, told The Jakarta Post recently that it was agency workers who originally had the initiative to develop the garden, as they noticed the insects flying around a nearby grass field.

After the Cipinang Melayu subdistrict head gave a nod to the idea, they started in September to clear the area from domestic waste that was dumped at the site before kicking off in October the development of the butterfly garden using available materials owned the subdistrict.

“The garden is designed to utilize waste land, which was once used by residents to dump their domestic waste,” Taryono said, adding that the waste dumped in the area could amount to 10 tons a day at that time.

A month later, they finished developing the garden, which is also equipped with a 15-sq-m, 2-m high cage for sooty-headed bulbul birds.

As the lifespan of butterflies usually lasts a few weeks only, combined with the ability of some of the butterflies to sneak in and out of the netting, the number of butterflies inhabiting the garden always varies. However, it could possibly amount to some 100 butterflies from more than five species based on Taryono’s observation.

Despite the relatively small number of butterflies compared to the Butterfly Garden in the Taman Mini Indonesia Indah (TMII) in East Jakarta, for example, the butterfly garden in Cipinang Melayu has attracted loyal visitors, particularly children.

Ridho, a second-grade student who lives nearby, said that he visited the park almost every day just to experience walking through the garden with insects flying around him.

“I love it very much,” Ridho said, accompanied by his three friends who were also visiting the garden on Monday.

Ridho pointed out a black, orange and white butterfly known as a great egg-fly that was flitting from flower to flower, saying it was his favorite.

Other butterfly species such as monarchs, chestnut tigers and striped albatrosses were also seen in the cage, fluttering among soka, roses, globe amaranths and many other flowering plants inside the garden.

Taryono said that not only local residents but also some early childhood education school (PAUD) pupils visited the garden, with the furthest coming from Jatibening, Pondok Gede in Bekasi, West Java.

“[Cipinang Melayu] RTH is expected to become an educational-recreation space,” he said.

In an attempt to realize the goal, the subdistrict administration, in cooperation with local residents, has gradually utilized the area by creating an urban farm, a fish pond and saung (huts) for gathering.

The urban farm produces cayenne peppers, long beans and eggplants, while the 10-sq-m fish pond is used to breed carp.

Syahrul said a camp site, herb garden, sports field, a waste bank and composting site would be developed in the RTH to promote many learning topics for visitors.