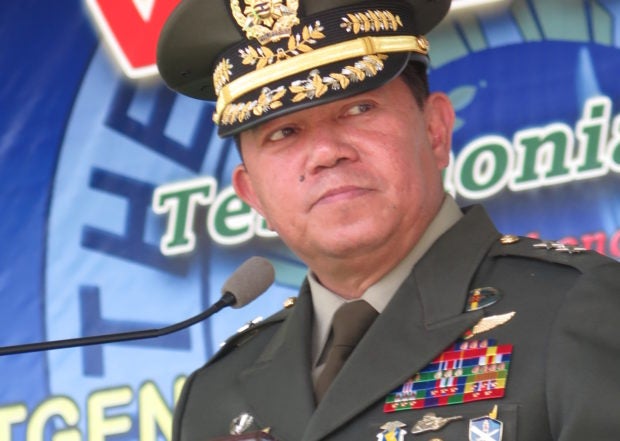 LUCENA CITY – The new commander of the military’s Southern Luzon Command (Solcom) vowed to lead the government forces to be the “guardians of peace” in Southern Tagalog and Bicol regions.

“We will remain as the guardian of peace in the region with the implementation and realization of the AFP (Armed Forces of the Philippines) development, support and security plan Kapayapaan (Peace),” said Major General Gilbert Gapay, who has been designated the acting Solcom commander in a ceremony held in Camp Nakar in Lucena City on Tuesday.

Gapay, a member of Philippine Military Academy-Class of 1986, was the former commander of the Army’s Mechanized Infantry Division based in Capaz, Tarlac.

He expressed optimism that their raging battle with the communist New People’s Army rebels in Southern Tagalog would soon peacefully end with the successful anti-insurgency campaign waged by his predecessor, Lt. General Danilo Pamonag.

Pamonag, who was Solcom chief for over a year, will retire on Wednesday (Jan. 16) after 37 years and nine months of military service.

The change of command was presided over by AFP Chief of Staff Lt. Gen. Benjamin Madrigal Jr. /lzb